Erle Stanley Gardner's The Case of the Howling Dog 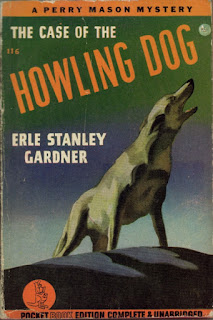 The Case of the Howling Dog is a fairly early Perry Mason mystery, dating from 1934. By this time Erle Stanley Gardner already had the Perry Mason formula humming along like a well-oiled machine.

As usual Perry Mason becomes involved in the case before any serious crime has been committed. It appears that his latest case is absurdly commonplace - a matter of a man being annoyed by the howling of a neighbour’s dog, and the drawing up of a will. These are matters so trivial that Mason would normally not take such a case. But Perry Mason has the instincts of a detective as well as those of a lawyer and his detective’s nose has detected the scent of something  bigger. Mason likes cases that will bring him lots of publicity, that being the road to fame and success as a trial lawyer. However he also can’t resist anything that promises to be a bit odd or (even better) exciting.

As it happens his client, one Arthur Cartright, has paid him an enormous retainer so money is no problem in this case. Mason decides to spend some money. He asks his old friend Paul Drake to do a bit of digging and pretty soon every man in the Paul Drake Detective Bureau is busily gathering a mountain of information. Perry Mason means to find out exactly why Clinton Foley’s  howling dog should cause so much drama, why a man would go to so much trouble to spy on a neighbour, why a man would draw up a will with such curious provisions, and perhaps most of all he intends to find out why Cartright has such a strange interest in Foley’s wife. There’s also the matter of the beautiful young housekeeper who goes to a good deal of trouble to make herself look old and plain, and the deportation of a Chinese cook.

Mason soon has plenty of data but no real answers but he’s not entirely surprised when the murder occurs.

The plotting adheres to a rigid formula but Gardner always manages to introduce enough twists to make the formula seem fresh each time.

As a successful trial lawyer himself Gardner obviously loved courtroom scenes but he understood the dangers. They can quickly become boring so it’s essential to keep throwing in spectacular surprises. Since Perry Mason is an attorney whose entire approach to his job rests on springing surprises this works well.

This book gives Mason the opportunity to expound his legal philosophy. It’s not a defence attorney’s job to decide if the defendant is guilty or innocent, that’s the jury’s job. The defence attorney’s only task is to give his client the best possible chance, even to the extent of using what might appear to be dirty tricks.  The prosecution will certainly use dirty tricks so a defence lawyer actually has a responsibility to do the same in order to give his client a chance.

Compared to the later novels the Perry Mason of the early books was even more inclined to sail very close to the wind in order to protect a client. He won’t cross the line into actual illegality but he’ll go within a hair’s breadth of doing so, an approach that exasperates policemen and district attorneys who dream of the day that Mason will actually cross that line and they can nail him.

Mason gives a spirited and eloquent defence justification of the the adversarial nature of the trial system. Mason’s philosophical approach to the law was of course Gardner’s and it adds a bit of substance to the Perry Mason novels.

The difficult part is for the lawyer to do all these things whilst still remaining himself within the law. He can stretch the law as much as he likes but he can’t break it. The extraordinary balancing acts in which Perry Mason engages in order to do this provide much of the suspense and interest of the stories. The Case of the Howling Dog has plenty of examples. Even Paul Drake and Mason’s faithful secretary Della Street are horrified by the risks he runs and they’re familiar with his methods.

Gardner adds a nice little sting in the tail this time around.

This is one of several early Perry Mason stories in which an animal provides, directly or indirectly, absolutely crucial evidence. It’s a trick that Gardner used remarkably effectively and without resorting to mere gimmickry.

The Case of the Howling Dog is splendid entertainment. Highly recommended.
Posted by dfordoom at 1:12 AM