The Case of the Baker Street Irregulars 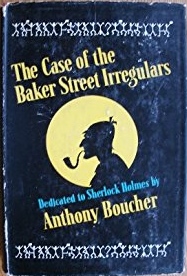 Anthony Boucher was much better known as a critic but in the late 30s and early 40s he wrote a handful of very well-regarded detective novels. The most famous is perhaps The Case of the Baker Street Irregulars, published in 1940. The title would lead the reader to expect a Sherlock Holmes pastiche but this book is actually something very different, and far more interesting.

This is a Holmesian puzzle but not only does Sherlock Holmes not appear in the book, there is also no Sherlock Holmes imitation or clone or anything along those lines in the story. It’s actually a novel about Sherlock Holmes fans. In fact it’s perhaps the earliest detective novel that takes fandom as its subject matter. The Baker Street Irregulars was (and still is) in real life a kind of club composed of mostly literary figures united by their obsession with the Sherlock Holmes stories.

Metropolis Pictures is about to make a film adaptation of Sir Arthur Conan Doyle’s The Speckled Band. Metropolis Pictures is a typical Hollywood studio run by a typical Hollywood mogul, F.X. Weinberg. Weinberg is a man who proudly wears his vulgarity on his sleeve. Any chance that the film will be a faithful adaptation went out the window when Stephen Worth was assigned to write the screenplay. You see Stephen Worth is a hardboiled crime writer who despises the Sherlock Holmes stories and despises Sherlock Holmes fans, especially the Baker Street Irregulars. Worth intends to write a screenplay that will be a merciless mockery of Conan Doyle’s creation.

Even a man as crass as F.X. Weinberg can see that this could cause problems. It could cause problems that would hurt the picture at the box office. He wants to fire Stephen Worth from the picture but Worth has an air-tight contract - if Weinberg wants the picture made Worth has to be the screenwriter. Weinberg’s solution is to hire five prominent Baker Street Irregulars to act as technical advisers to make sure the movie is properly Sherlockian. The combination of Worth and the Baker Street Irregulars is guaranteed to lead to fiery confrontations. In fact it quickly leads to murder. The police are faced with a major problem - there was definitely a murder but there’s definitely no body.

At this point the novel starts to become slightly surreal. The day after the murder the five Baker Street Irregulars all have extremely bizarre adventures and these adventures are all eerily reminiscent of various Conan Doyle Sherlock Holmes stories. In fact the whole case becomes more and more a tangle of Sherlockian references and Sherlockian clues. It has to be said that Boucher handles this with great dexterity and ingenuity.

The main plot has plenty of suspects, lots of alibis and lots of twists. And there are floor plans, and diagrams, always a major plus in my view.

If there’s a weakness it’s the political angle which becomes a bit tedious. OK, Nazis were very topical in 1940 but today they get boring rather quickly.

Boucher was nothing if not ambitious since he also throws in a romantic sub-plot. This is something I mostly disapprove of in golden age detective stories but this one is handled pretty well, and more importantly the author manages the difficult feat of not allowing the romance to slow down the plot.

If you love codes and ciphers then you'll be overjoyed to learn that there are a whole swag of them in this story.

This is a book that is probably not capable of being appreciated by readers who don’t have at least some acquaintance with Conan Doyle’s stories. Such readers are going to miss all the in-jokes and all the wit and will probably find the book to be mystifying, but mystifying in a bad way. On the other hand if you’re a Sherlock Holmes fan you’re likely to find the whole thing to be very enjoyable indeed. On the whole I liked it and it’s clever enough and original enough to be regarded as a substantial achievement. So for Sherlock Holmes fans, highly recommended. For non-Sherlock Holmes fans, possibly one to avoid.
Posted by dfordoom at 1:22 AM