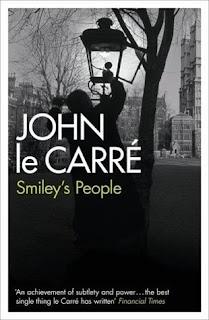 Smiley’s People is the concluding volume in John le Carré’s Karla trilogy. It appeared in 1979.

George Smiley has now retired and this time he expects his retirement to be final. And it would have been, if only Vladimir hadn’t managed to get himself killed. Vladimir, otherwise known as The General, had been one of the Circus’s best agents. That was a long time ago. He has long been inactive and the Circus had just about forgotten his existence. What’s disturbing about Vladimir’s death is that just before he died he had telephoned the Circus, demanding an immediate meeting with Smiley (of course the old boy had no way of knowing that Smiley had retired).

Now the Circus wants Smiley to clear up the loose ends of the case. What they mean by this is that they want the whole thing buried. They don’t want anything to be found that might link Vladimir to the Circus. They want a cover-up.

Since it’s a cover-up they want it may have been unwise to ask Smiley to take care of it. Smiley is a man who still takes the business of espionage very seriously. They should have realised that if he found anything worth following up he’d follow it up. And he finds quite a few things worth following up. Like the way Vladimir was killed, by a method used only by the Soviet intelligence services. The General had really been on to something. Something big.

There have been big changes at the Circus. As Toby Esterhase (now also in retirement) puts it, the Circus has now joined the Boy Scouts. They are no longer allowed to use any of the techniques of actual espionage. With Saul Enderby now in charge the Circus is merely a political tool and it’s a tool in the hands of a government that wants an intelligence agency that costs nothing to run and doesn’t make waves. One of the things the Circus is no longer permitted to do is to make use of émigrés like Vladimir. They’re yesterday’s men, men who think the Cold War is still going on.

Smiley is a yesterday’s man as well. There is one problem. An ageing superannuated ex-spy he may be but George Smiley is still the the best man in the business and now he has found a scent and he intends to pursue it, wherever it may lead.

The yesterday’s man theme is one that seemed to fascinate le Carré. The Looking-Glass War deals with a British intelligence agency composed of World War 2 heroes who have never adapted to the new post-war world. In Smiley’s People it’s Cold War spies who can’t adapt to a world in which the Cold War is winding down. This obsession gives le Carré’s spy fiction much of its distinctive tragicomic tone.

This novels falls into two quite distinct halves. The first charts the course of Smiley’s investigation. It’s essentially a detective story with Smiley playing the role of private detective, the Circus having no knowledge of what he’s up to. The second half follows the course of Smiley’s operation, a semi-official undertaking by a whole bunch of yesterday’s men. Smiley is now the hunter.

In The Looking-Glass War the yesterday’s men are bumbling incompetents but in Smiley’s People they’re the old school professionals contrasted with the inept new men.

One very odd thing about le Carré is that although he could never be described as an upbeat writer his 70s spy fiction strikes me as being slightly less defeatist than his 60s work. This is very odd since it’s also obvious that he’d become even more cynical about government and the uses to which intelligence agencies were put by government. Perhaps he had at the same time become marginally less cynical about human nature.

Karla has always been like a sinister inhuman force lurking in the background. In Smiley’s People he finally takes on a human face, much to George Smiley’s consternation. Could the great Karla actually suffer from human weaknesses?

This is a fine conclusion to the Karla trilogy, and to the George Smiley saga (although I believe he makes cameo appearances in a couple of later novels). Highly recommended.