Some recent reviews of vintage crime films from my movie blog.

Johnny Angel (1945) is an interesting RKO film noir with a nautical theme starring George Raft (and I'm quite a fan of George Raft).

The Terror (1938) is a thoroughly enjoyable potboiler based on an Edgar Wallace story. It has an excellent cast and with just a hint of horror as an added bonus.

Assassin for Hire (1951) is a fine low-key very British crime thriller with strong film noir affinities and another superb central performance by Sydney Tafler. It’s no masterpiece but B-movie fans will find plenty here to enjoy.

The Teckman Mystery (1954) is a decent British crime thriller, co-written by Francis Durbridge, and with a hint of espionage as well.

Green for Danger (1946), an extremely entertaining British film adaptation of Christianna Brand’s much-praised 1944 novel of the same name. A wonderful performance by Alistair Sim is the highlight.

Raffles (1939), a not entirely successful movie based on E.W. Hornung's Raffles short stories although David Niven had the potential to be a great Raffles. 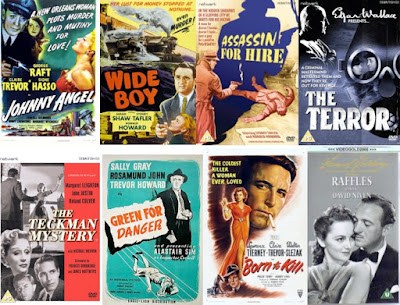