Christopher Bush’s The Body in the Bonfire 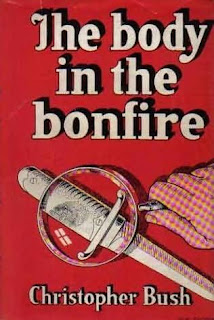 The Body in the Bonfire (also published as The Case of the Bonfire Body), one of Christopher Bush’s sixty-three Ludovic Travers mysteries, appeared in 1936. By this time Bush had already written more than a dozen mysteries and was obviously well into his stride.

Given that the writing career of Christopher Bush (1888-1973) spanned more than four decades and that he had in total more than seventy books published he was evidently fairly successful at the time. He has since fallen into almost total obscurity.

Bush was in many ways the archetype of the writers dismissed by Julian Symons as the Humdrum School. He was seemingly content to be a writer of detective stories with no high literary ambitions and his detective fiction is resolutely plot-driven.

At his best however his plotting can be quite dazzling in its intricacy and The Body in the Bonfire is a prime example. It features several plot devices that were by no means entirely original but Bush pushes them to the limits and incorporates multiple uses of the same plot device in the one story to produce the maximum of fiendish complexity. Surprisingly enough it does all make sense in the end and the solution is quite satisfying.

Unusual murder methods were popular among golden age mystery writers. In this case there is an unusual element to at least one murder but it’s the circumstances of the discovery of the first body that are most outlandish. The author plunges us straight into the action. By page three Travers has already discovered the first body, a corpse hidden inside a bonfire on Guy Fawkes’ Night. The corpse has had the head and both hands hacked off. Evidently the murderer was very very determined that the body should be as difficult to identify as possible. In fact identification proves to be a very great challenge indeed.

While there is no impossible crime as such in this tale there are impossible aspects to the murders. There are clues that cannot possibly be true and yet there they are. There are alibis that are as rock-solid as alibis could possibly be, and yet if the alibis are sound the whole case is impossible.

Ludovic Travers himself is on the surface a fairly typical amateur detective (although in later books such as The Case of the Second Chance he has converted his hobby into a profession). In all the books his collaborator is Superintendent George Wharton. Travers is wealthy, educated and distinctly upper-class and his intelligence is brilliant if erratic. Wharton is a working-class boy who made it to the top of his profession through hard work and determination. He is intelligent but his intelligence is very much of the methodical commonsense type. They are opposites in every conceivable way but firm friends.

What makes Travers and Wharton interesting is that they do not always conform to our expectations. We assume Wharton will be the good-natured blustering dunderhead whose deductions are always wrong but on crucial occasions in this story he is proved to be right while Travers is wrong. Travers is a genius detective but his genius is not entirely reliable. Both Travers and Wharton are colourful and sometimes amusing characters.

The Body in the Bonfire moves along at a pleasingly brisk pace and has a plot containing enough twists and turns to satisfy any reasonable fan of golden age detective fiction. Highly recommended.

The Case of the Tudor Queen, which appeared two years later, is every bit as good so the late 30s were obviously a fertile period for this author.
Posted by dfordoom at 6:55 AM