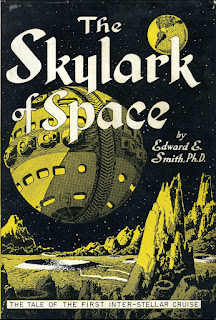 The Skylark of Space is one of the earliest (and most influential) examples of space opera. It launched the writing career of one of the science fiction greats, E. E. “Doc” Smith (1890-1965) and it set the tone for the space opera genre.

Smith (1890-1965) started writing the novel in 1915, in collaboration with Lee Hawkins Garby (she handled the romantic subplots which Smith felt less than confident about tackling). After abandoning the book in 1916 Smith took it up again in 1919 and completed it the following year. He had major problems finding a publisher and it finally appeared as a three-part serialisation in Amazing Stories in 1928. It was revised for book publication in 1946.

The Skylark of Space opens with an accidental discovery by government chemist Dick Seaton - a hitherto unknown transuranic element with some startling properties. Combined with copper and with the use of a kind of cyclotron it can unleash almost limitless amounts of energy. It will obviously be immensely useful (and profitable) for generating power but Seaton can see a much more exciting use for it - it could power a spaceship. Not just a spaceship, but a starship. He goes into partnership with a wealthy friend, Martin Crane, but unfortunately another scientist, Marc DuQuesne, has figured out that Seaton has stumbled upon something big. DuQuesne has no ethics whatsoever and he has a partnership of his own with the unscrupulous head of the World Steel Corporation, Brookings. DuQuesne and Brookings instead to steal the secret. They build their own spaceship and kidnap Seaton’s girlfriend Dorothy.

Seaton and Crane have built their spaceship, the Skylark, and they set out to rescue Dorothy, who is now 238 light years away! This will be a chase through space but there’s more to the story than that. Seaton and his companions visit a number of distant planets, some stranger than others. Some very strange indeed, such as the planet inhabited by a rather perverse creature who is all mind and thinks that humans would provide him with some amusing if cruel entertainment.

Finally they find a planet that has what they want - plentiful supplies of copper. The planet is home to two civilised races who seem basically human. Civilised is perhaps an exaggeration - the people of Mardonale and those of Kondal are trying to exterminate each other and going about this process with great enthusiasm and determination. The Kondalians are friendly but their culture is profoundly alien. Seaton has no great wish to be caught up in a planetary war but he seems unlikely to have much choice. The planet is also home to fearsome and gigantic armour-plated flying creatures that are almost impossible to kill and destroy anything they can catch. 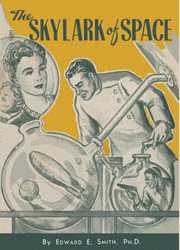 This being a Doc Smith novel there is plenty of action and action was something he handled very adroitly. Smith was never intimidated by scale - his stories are big stories with big battles and cover vast reaches of space.

In some of his later novels Smith tried to make his advanced technologies vaguely plausible but in The Skylark of Space he simply allows his imagination to run riot. It’s mostly pseudoscientific nonsense but that makes it all the more enjoyable. Faster than light travel is no problem - Einstein’s theories are after all just theories.

Characterisation was not one of Smith’s strengths. His heroes are straightforward square-jawed heroes who also happen to be extremely intelligent. They’re pretty much good at everything. In Marc DuQuesne however he has created a genuinely interesting character - a man entirely lacking in emotion but not quite a conventional villain.

The alien civilisations of Kondal and Mardonale really are convincingly alien, with customs and beliefs and values that are deeply shocking to our heroes but at the same time the Kondalians do have a highly developed, if odd, sense of honour.

Smith deals in passing with a number of issues that were big deals in the 1920s, including eugenics and free love. He also has some fun with the Kondalians’ inability to comprehend how any civilisation could be crazy enough to adopt a system like democracy, rather topical in view of the fact that the 1920s witnessed the rise of a number of ideologies that posed a very real challenge to democracy. Fortunately Smith doesn’t get into such subjects too deeply - there are no political lectures here.

Doc Smith had few literary aspirations. In fact he had none at all. He was a pulp writer and he wrote in a pulp style. What he lacked in polish he made up for in energy.

Mostly The Skylark of Space is high octane adventure displaying an impressive imaginative gift. More surprisingly there’s quite a bit of romance. On the whole it’s outrageous fun. Not quite in the same class as the best of his slightly later works such as Galactic Patrol but still very good indeed. Highly recommended.