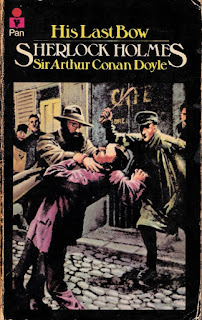 I’ve been rereading some of the Sherlock Holmes stories. I’ve been a fan of these tales for very many years and returning to them is like revisiting an old and dear friend.

While Conan Doyle certainly did not invent the detective story he put it on the map as a major popular genre. He also established a few of the vital ground rules which differentiated the detective story from the popular sensation novel of the Victorian era. Sensation novels dealt with crime but the crime-solving process was never the main focus and was often ignored altogether. Conan Doyle made it the core of his stories.

Conan Doyle also established the rule that the process of detection should be logical. Relying on inspired guesses or luck was not acceptable. The detective’s chain of reasoning had to be logical. They were not always strictly fair-play stories in the sense that the term is understood in relation to the detective fiction of the golden age. Holmes sometimes makes use of evidence that the reader is not aware of until the final revelation. They are however fair to the reader in the sense that the solution hangs together satisfactorily and we feel that based on the evidence he had available to him Holmes really could have solved the crime.

An absolute adherence to the later fair-play conventions is in any case more applicable to novels, which had stated to dominate the field by the 1920s. It’s not quite so important in the short story which is the format Conan Doyle mostly worked in. And some of the stories certainly are fair-play. In The Adventure of the Blanched Soldier (which I have just read) Holmes has largely solved the case after his first interview with his client. When at the end of the story he explains his reasoning it has to be admitted that his initial theory, which turned out to be correct, really was the only plausible solution and that an alert reader did have all the clues needed to solve the mystery.

Another convention that Conan Doyle established is that it’s the solution of the puzzle that matters. Once Holmes has solved the crime to his own satisfaction the business of arresting the culprit and bringing him to trial is not his concern. In quite a few stories the police are not involved at all since no actual crime has been committed, or any crime that has been committed is not sufficiently serious to warrant an arrest. The story is simply concerned with the unravelling of a mystery.

Conan Doyle made the detective story intellectually respectable. He made the genre into something that an educated person did not not need to feel overly embarrassed about enjoying. The detective story acquired a degree of intellectual respectability that other popular genres such as thrillers or spy stories or adventure stories did not achieve. This was largely due to the emphasis that Conan Doyle put on crime as a problem that could be solved by scientific inquiry and by the exercise of reason. Perhaps equally important he demonstrated that stories of detection could be rational while still being highly entertaining. 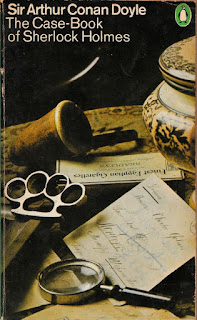 It’s highly significant that Conan Doyle was a doctor, and therefore a man of science. In the late 19th century that in itself helped to confer respectability on the Sherlock Holmes stories.

My recent Sherlock Holmes reading has included quite a few of the later stories and also several of the small number of stories not narrated by Dr Watson. The Adventure of the Blanched Soldier is narrated by Holmes himself. This is one of the very last batch of the Sherlock Holmes stories (it dates from 1926) and Watson does not appear at all. His Last Bow is the only story in the canon to feature third-person narration. It’s a very disappointing spy story. Conan Doyle was a master of a bewildering number of genres. He wrote extremely good horror stories, tales of sea-faring adventure, excellent science fiction and was the finest writer of historical fiction of his generation. His Last Bow suggests that that the one genre he did not master was spy fiction. Written in 1917, it’s a very patriotic story with Holmes coming out of retirement to battle German spies. I can understand the desire to write such a patriotic tale in 1917 but it just doesn’t work and it also shows that Conan Doyle had no understanding of spy tradecraft. It’s interesting mostly in being the Great Detective’s final case (although it was far from being the last Sherlock Holmes story to be written).

The Adventure of the Veiled Lodger (from 1927) is, sadly, another disappointment. There’s no detection whatever in this story. Which is a pity because it contains the germ of what could have been an entertaining mystery in a carnival setting involving a murder possibly committed by a lion.

The Adventure of the Three Garridebs is another late story (from 1924) and it’s a much more typical Holmes adventure. It’s also a very much better story. It utilises a device that Conan Doyle seemed to be quite fond of - a very simple crime that seems on the surface to be incredibly complex and totally mystifying and quite bizarre. It’s a technique that he used with considerable skill in more than one story. It’s an amusing tale centred on the coincidence of three unrelated men with the same very unusual name and it’s a satisfying mystery. In fact I’d rate it as one of the most underrated of the Sherlock Holmes stories.

The Adventure of the Retired Colourman is another solid story. An elderly man with a young attractive wife is always a recipe for trouble and Josiah Amberley certainly has troubles. His wife has run off with a handsome young doctor and the couple have taken all of Josiah Amberley’s very considerable life savings with them. The young doctor is an expert chess player which, as Holmes points out, is always the sign of a scheming mind. Holmes happens to be fully engaged on another case of international importance so he asks Dr Watson to conduct the preliminary investigation. Watson of course can make nothing of the case although he does unwittingly uncover the two most vital clues, clues which allow Holmes to solve the puzzle.