Nicholas Blake’s Head of a Traveller 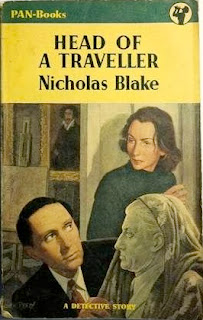 Head of a Traveller, published in 1949, was the ninth of Nicholas Blake’s Nigel Strangeways mysteries. It’s a good example of the strengths and the weaknesses of his writing.

Nicholas Blake was the pseudonym used by noted poet Cecil Day-Lewis (1904-1972) for his detective fiction. Day-Lewis had been a communist in the 30s but eventually renounced his extreme political views. Political themes do appear in some of his detective stories but (mercifully) they rarely threaten to overwhelm them. Detective fiction was a convenient way for a poet to earn some actual money from his writing but his love for the genre seems to have been genuine and mostly he adheres to the conventions of the golden age fair-play puzzle-plot mystery. And it has to be said that he had considerable skill as a mystery writer.

Nigel Strangeways is in the tradition of amateur gentlemen detectives although he generally works in fairly close co-operation with the police. When a headless corpse is found in the Thames not far from Plash Meadow, the elegant Queen Anne country home of eminent poet Robert Seaton, it’s not surprising that Nigel takes an interest in the case.

The house itself becomes a character in the story, partly because of the extraordinary atmosphere that seems to envelop the house but also because it soon becomes clear that the house itself may provide the most promising motive for the crime.

Seaton is a poet who no longer writes poetry and his marriage is far from ideal. The unexplained presence on the estate of an ambitious but talentless painter and his daughter adds to the tensions. Added to this is the fact that Robert Seaton’s son Lionel, who had been a paratrooper in the war, is having some difficulties adjusting to civilian life. Most disturbing of all is Finny Black, the Seatons’ mute dwarf servant. It is obvious that rather deep passions lurk beneath the surface of life at Plash Meadow.

The situation threatens to become explosive when the identity of the headless corpse is revealed. Nigel and his old friend Superintendent Blount are faced with a case in which everyone is hiding something, and while there are plenty of clues they are frustratingly ambiguous and contradictory.

It has to be said that the author ties the various plot strands together with impressive dexterity. The book is written in the third person but entirely from Nigel’s point of view. The tricky element with this approach is that we’re privy to all of the detective’s thought processes so in order to keep the ending a mystery it is necessary for the detective himself to be unsure of the killer’s identity right up until the end but Blake carries this off with effortless skill.

So far so good. This is a well-written well-constructed puzzle plot mystery with some colourful and reasonably (by detective fiction standards) complex characters. Blake’s prose is pleasingly polished. There is obviously much to admire in this novel.


I did however have a couple of very big issues with this book. While Head of a Traveller qualifies as a true detective story there are signs that the author was succumbing to the dangerous and pernicious temptation to try to combine detective fiction with Literature. Or at least to add a literary subtext. The result is a powerful demonstration of the folly of such endeavours. He tries to combine the mystery plot with ruminations on the importance of poetry and the nature of poetic inspiration and the challenges facing the creative individual in a world that fails to recognise just how important poets are. Unfortunately his observations on these subjects are somewhat trite and adolescent, they slow things down and they become rather irritating.

My second issue has to do with the book’s moral stance. It’s true that many of the great fictional detectives of the golden age occasionally struggle with the conflict between satisfying the demands of the law and the demands of justice. There are times when they are inclined to bend the law just a little, or to feel some sympathy for criminals who are to some extent victims of circumstance. For the most part however the fictional detective (like his real-life counterpart) recognises that while the law may be imperfect it is nonetheless vital. It is all that stands between civilisation and barbarism. With the Nicholas Blake books  however we are in real danger of finding ourselves in the quicksands of moral nihilism. Even worse is the implication that art should trump morality. We are presented with a number of characters who believe that art is more important than the law, or morality, or even human life. And Nigel Strangeways shares this corrupting belief. This is something that makes me profoundly uneasy.

Head of a Traveller does contain a fine well-crafted detective story. It’s unfortunate that it’s combined with a certain amount of the kind of pseudo-intellectual silliness one would expect from a callow undergraduate. Despite its undoubted virtues it’s difficult to recommend this book without some reservations.