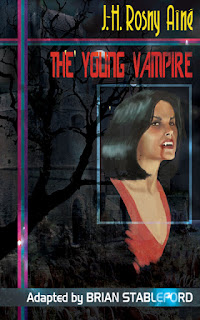 It’s certainly a varied and odd collection. The Witch is a very early story and it’s mind-numbingly dreadful. In fact it’s one of the worst stories I’ve ever read, in any genre. It’s an ugly ham-fisted embarrassingly obvious tale about the persecution of a woman accused by peasants of witchcraft. The story positively drips with the author’s loathing for his characters and for the peasantry in general, and with his narrow-minded anti-religious bigotry. All that would be bad enough but it’s also one of the most abysmally poorly written stories you’re ever likely to encounter. Whether that is entirely Rosny’s fault or whether Brian Stableford, who translated the stories in this collection, must also accept part of the blame is difficult to determine. Stableford’s translations are not usually this bad so he may well have been deliberately trying to capture the flavour of Rosny’s prose, a flavour that is an unholy blending of clumsiness and pomposity.

The Young Vampire is somewhat more interesting. It’s just as badly written but at least it has some clever ideas. It concerns a young woman named Evelyn noted for her oddness and extreme pallor. Her mother explains that the pallor is caused by the fact that Evelyn died some months earlier. She died, but three days later she revived. Since then she has been abnormally pale and strangely disconnected. And, although her family is not yet aware of the fact, she has become a vampire. This fact is discovered by her husband shortly after their marriage. As you might expect this puts a certain amount of strain on the marriage although the husband tries to accommodate himself to this distressing situation.

This story, published in 1920, is a very early fictional example of vampirism as a kind of medical condition. It’s a bit more than that though - it also involves transference of personality and the implication of some kind of alternative existence although whether we’re intended to see this as having supernatural or scientific causes is open to debate. It seems most likely that the author intends it to be seen as a scientific phenomenon although he declines to give us any kind of explanation.

These are good ideas but they’re weakened by the awkward writing and the overall tone. Rosny seems to be aiming at satire although I have to confess I’m not sure what it is he’s trying to satirise. Possibly the English, since he seems to convey a considerable dislike for them in the story.

The Supernatural Assassin, dating from 1923, is a considerable improvement on the first two stories. It’s a reworking of one of the favourite themes of gothic fiction but it attempts to give it a vaguely scientific, or perhaps psychological, basis. It does have the authentic gothic atmosphere of the uncanny.

Companions of the Universe, published in 1934, is a mess. I have no idea what the author was aiming for. Brian Stableford, who translated these stories, admits in his afterword that he has no idea what Rosny was trying to do in this story either. There is a minor science fictional sub-plot that goes nowhere and we never find out what it’s about apart from some vague references to a fourth universe. However almost the entire novella-length story is taken up by the romantic adventures of the hero with a startling number of women with tedious musings on the nature of love and sexual attraction, plus some odd nonsense about the hero’s three natures although what these three natures might be remains (perhaps mercifully) obscure. At times it becomes almost Proustian in its meanderings. The main story is uninteresting and the science fiction element is at best a very minor afterthought that has nothing to do with the rest of the story. This is the kind of stuff that gives French intellectuals a bad name.

The Navigators of Space is a very uneven but far better collection of Rosny's work, often dealing (in a much more interesting way) with similar themes

Overall The Young Vampire is a truly abysmal collection. Two stories that have some minor interest and two absolutely atrocious stories. Just remember I wasted precious hours of my life reading this rubbish so you won’t have to! Avoid at all costs.
Posted by dfordoom at 2:54 PM