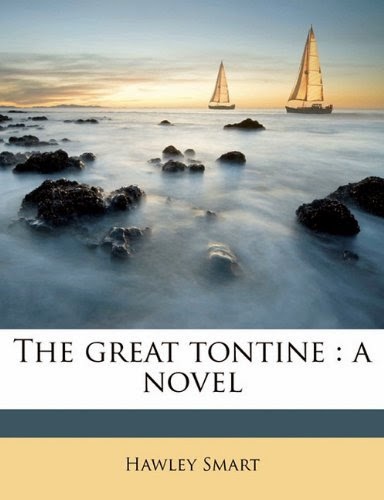 Hawley Smart’s The Great Tontine, first published in 1880, is an early crime/mystery novel.  It’s one of four short novels or novellas included in the marvellous Victorian Villainies anthology, edited by Graham Greene and his brother Hugh Greene.  I think it qualifies as detective fiction - at least there are several amateur detectives involved.

Henry Hawley Smart (1833–1893) was a British army officer who became a reasonably prolific and successful writer, specialising in stories with a racing background. It was his lack of success as a gambler that led him to take up writing. While The Great Tontine is a mystery it certainly involves gambling, albeit gambling of a rather unusual nature.

The Great Tontine is about a strange lottery, in which each ticket holder nominates the life of someone over the age of 60.  The money raised is invested, in this case in an opera house, and dividends are paid.  As soon as your nominated life dies, you stop getting any dividends.  As more and more of these lives die, the dividends paid to the remaining stake holders keep increasing.  When only one is left alive, that ticket holder collects the entire stake.  In this case that amounts to 160,000 pounds.  That’s in 1880 money – in modern money it would have to be tens of millions, if not hundreds of millions.  So, obviously, there’s a huge temptation to cheat.  When the story proper begins there are just three viable tickets remaining, belonging to an impoverished nobleman, a poor widow, and a grasping lawyer.

Hawley Smart mixes some humour and some romance in with the suspense, and the result is highly entertaining.  His writing style is witty and amusing.  The basic idea has been copied several times, including an excellent version of the idea in an episode of The Wild, Wild West back in the late 1960s. The Great Tontine  is an excellent piece of Victorian crime fiction.
Posted by dfordoom at 10:29 AM