Sweeney Todd, or the String of Pearls 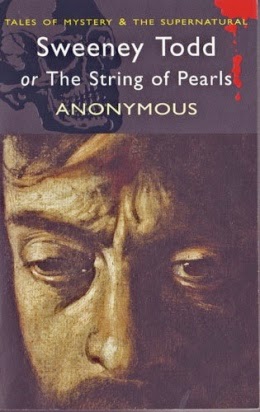 Sweeney Todd, or the String of Pearls is one of the most famous of the notorious “penny dreadfuls” of the 19th century, lurid crime and horror pot-boilers published in weekly instalments. The identity of the author or authors is still disputed, but the original version of Sweeney Todd, or the String of Pearls appeared in 1847. Many subsequent versions, including pirated editions, followed, as well as stage adaptations, and by the 1880s it had gained a new sub-title -  The Demon Barber of Fleet Street. The Wordsworth paperback brings the 1850 edition back into print, and it’s a good deal of fun.

Since it was published in weekly parts the story is revealed quite gradually, with lots of cliff-hanger endings in between. Of course the modern reader has a pretty fair idea of the explanation behind the mysterious disappearance of so many of the customers at Sweeney Todd’s barber shop, and of the means by which Mrs Lovett is able to supply he own customers with so many delicious pies with such an unusual and exotic flavour, not at all like the regular run of pork and veal pies. You have to remind yourself that these explanations really would most probably have come as a shock to readers at the time.

It’s wonderfully sensationalistic and gruesome, and delightfully breathless and overheated.  Sweeney Todd is an epic villain, with no redeeming qualities whatever. The madhouse scenes are particularly chilling, being much more plausible than the other horrors in this tale. The director of the madhouse is even more wickedly villainous than the nefarious barber himself! And Johanna is a brave and noble heroine.

If you’ve been put off reading this by Tim Burton’s movie than you should reconsider. It’s infinitely better than the film. It’s trashy of course, but it’s extremely entertaining. I recommend it highly, especially if you’re a fan of 19th century gothic and horror stories.

If you enjoy your first excursion into the world of the “penny dreadfuls” then you might also want to check out Wagner the Werewolf.