Eric Ambler’s Cause for Alarm 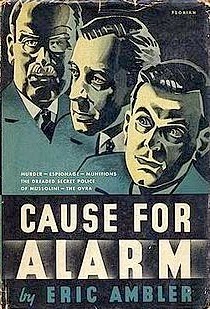 Although Eric Ambler’s Cause for Alarm appears as part of Pan’s Classic Crime series it’s really more spy thriller than crime thriller.  On the other hand, being published in 1938, it has the right period flavour for this community.  Although Ambler was English the mood is closer to the cynicism and corruption of Hammett and Chandler than to English crime writers of that time.  The British writer to whom Ambler is sometimes compared is Graham Greene, and the world Ambler scribes in this novel has more than a hint of Greeneland about it.  While Hammett and Chandler focused on cynicism and corruption at the level of city politics and local criminal activities, Ambler focuses on international politics and big business.

Cause for Alarm concerns a British engineer working in the Milan office of a British engineering firm, who becomes involved in shady government contracts and espionage.  He would make a perfect hero for a 1930s Hitchcock movie, being basically honest and decent but also rather naïve.  In fact this book would have made a great 1930s Hitchcock movie!

Eric Ambler (1909-1998) was, more than any other writer, responsible for popularising the gritty realist school of spy fiction. Epitaph for a Spy is the most famous of his early thrillers while Judgment on Deltchev is a good example of his later style.

Ambler’s style is crisp and pleasing, and he creates a very effective atmosphere of suspense and suspicion.  This leads up to an extended and very exciting chase.  Being the 1930s, the chase naturally involves trains, and you really can’t go wrong with a chase involving trains in the 1930s.  This is a very entertaining novel, with some very pertinent and still very relevant political aspects to it.  Highly recommended.
Posted by dfordoom at 11:37 PM