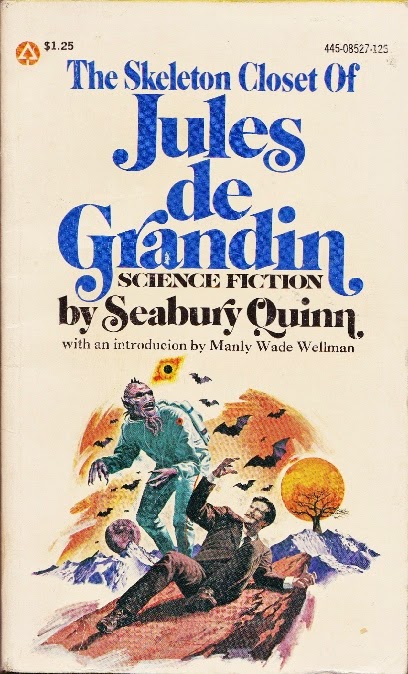 Quinn was very much a pulp writer and while his stories may not have much literary polish they do possess a great deal of energy and flair and Quinn was nothing if not inventive.

The Drums of Damballah opens with a series of inexplicable crimes - the murder of a kindly clergyman, the kidnapping of a baby, the theft of a crucifix from a church. To Jules de Grandin it all adds up to a voodoo cult in 1930s New York, planning human sacrifice. Plus there’s an ape-man. I’m something of a connoisseur of politically incorrect fiction and this may well be the most politically incorrect story I’ve ever encountered. It’s also tremendous fun.

The Doom of the House of Phipps is a good example of Quinn’s favoured method, taking a very clichéd idea and trying to give it a twist. In this case the clichéd idea is a curse that dooms any male member of a particular family who is unwise enough to marry. They will die with their mouths full of blood before they set eyes on their first-born child. This attempt is perhaps a little too contrived but it’s enjoyable enough.

Ancient Egypt and mummy’s curses were incredibly popular in the pulp era but The Dust of Egypt adds some genuinely original and very clever twists involving thought-patterns and belief. A superb little story.

The Brain-Thief is almost as politically incorrect as The Drums of Damballah. An evil Hindu uses hypnotism to control people and steal time from them. He steals not only time but their memories. This is a fine example of Quinn’s ability to come up with remarkably clever ideas and to exploit those ideas to the full.

The Bride of Dewer deals with the legendary practice of droit de seigneur, which supposedly gave a feudal lord the right to sleep with the newly married brides of his vassals on their wedding night. It’s a legend that remains popular despite almost certainly being entirely imaginary. Quinn turns it into a nice little gothic tale as a demon exercises that right over the course of many generations.

Daughter of the Moonlight deals with witchcraft and can also be considered as an unconventional vampire tale, or perhaps it would be more accurate to say that it deals with early conceptions of vampirism that were current before Bram Stoker created the vampire legend in its modern form. Early ideas on vampirism placed great stress on the power of moonlight. A rather grim tale that demonstrates de Grandin’s ruthlessness in dealing with evil.

Jules de Grandin might resemble Hercule Poirot in his humorous mangling of the English language but in reality he’s considerably more ruthless.

While some occult detective stories offer rationalistic explanations for various mysteries these stories are all avowedly supernatural, or at least they deal with events that defy rationalistic beliefs. One very interesting and fruitful idea that Quinn utilises in several of his tales concerns the power of words and the power of beliefs. Such powers may be supernatural or paranormal or they may be powers of the human mind that science has not yet unravelled.

As well as the many short stories Jules de Grandin also features as the hero of one novel, the deliciously lurid The Devil’s Bride.

Seabury Quinn’s overtly pulpy style has prevented him from gaining the recognition for his occult detective stories that more literary writers such as William Hope Hodgson have gained but his ability to tell clever and original stories in a very entertaining manner should not be underestimated. Highly recommended.