The Best of John W. Campbell 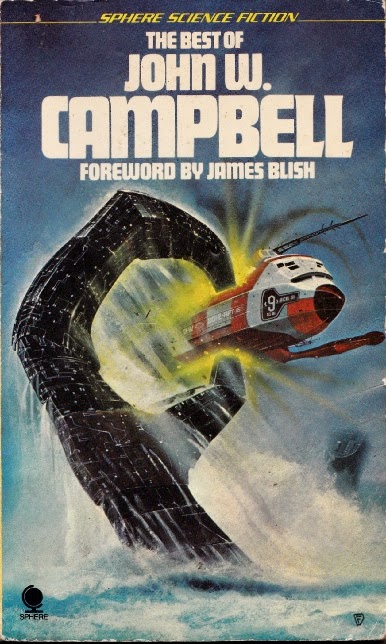 The Best of John W. Campbell collects five fairly long short stories written by Campbell in the 1930s. It includes his best-known story, Who Goes There? (reviewed separately here)

John W. Campbell (1910-1971) stopped writing fiction at a very young age at the end of the 1930s but went on to become even better known as an editor.

The five stories (or novelettes as they’d probably be referred to today) demonstrate Campbell’s boldness and his taste for epic themes.

Out of Night and The Cloak of Aesir deal with the four thousand year history of Earth’s colonisation and conquest by an alien race, the Sarn. The leader of the Sarn, the Sarn Mother, is immortal and ageless. She was old when her people conquered Earth but four thousand years later her authority remains unquestioned. Unquestioned at least until she does something almost unprecedented - she makes a mistake. The Sarn are a matriarchy and the Sarn Mother unwisely decides to impose a matriarchy on her human subjects. This finally drives them to revolt.

The odds are heavily stacked against the humans, given that humans have no access to weapons. Humans do however display a great deal of ingenuity in overcoming such obstacles. The Sarn have great intellectual gifts but they are a very long-lived race. The Sarn Mother will come to realise that this in itself gives the humans an advantage - short-lived species evolve very much faster and adapt more readily to changes in circumstances.

The other interesting feature of these two stories is that the secret weapon discovered by the humans is the ultimate nothingness. The great human scientist Ware has discovered a means to harness negative energy, and to produce a device that can in effect negate absolutely any positive energy. The issue of the revolt remains in doubt until the humans discover that other kinds of negative energy can be even more devastating.

Double Minds deals with a race whose scientists have discovered that only half the brain is ever in use. Finding a way to utilise both halves of the brain should make them twice as intelligent. And it does, in a way, but with some unexpected costs.

The most ambitious of the five stories is Forgetfulness, a story that spans millions of years. A relatively young race has finally managed to build a ship capable of reaching a nearby star system. This star system has habitable planets but most excitingly one of the planets contains the remnants of a very old civilisation indeed. This ancient civilisation built huge cities with power sources that were almost unlimited and had achieved even more - they had discovered a means of transmitting power instantaneously to any point in the galaxy.

This planer is still inhabited by the descendants of that great civilisation. They have turned their backs on their cities and their own civilisation and now live in primitive villages.

The explorers of the young race believe they can harness the powers of the ancient cities but there is something very very important that they don’t know. Something that changes everything.

All five stories display Campbell’s impressive imaginative gifts, his willingness to tackle big stories and his interest not just in science and technology but in the ways that science and technology interact with culture. Campbell played an important role in pushing science fiction in new and ambitious directions and away from the clichés of space opera.

The Best of John W. Campbell was published as a paperback by Sphere in the early 1970s and very cheap used copies can be easily found. Highly recommended.
Posted by dfordoom at 12:43 AM