Robert E. Howard’s The Hour of the Dragon 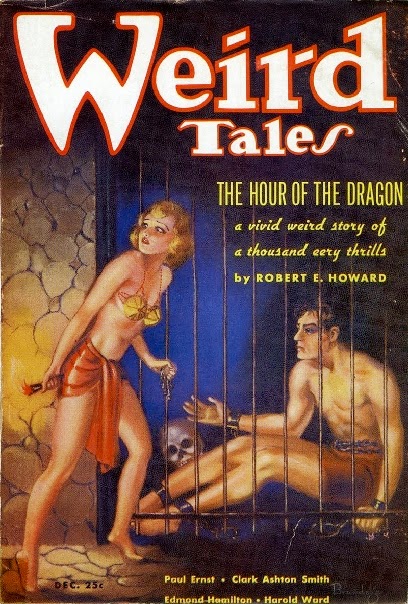 The Hour of the Dragon (also published as Conan the Conqueror) was Robert E. Howard’s only Conan novel. Written in 1934, it reworks some material from earlier short stories and was published in serial form in Weird Tales in late 1935 and early 1936. It shows that Howard was quite capable of writing in the longer format although for a pulp writer a novel was not a particularly attractive proposition, short stories being much easier to sell.

The novel takes place during the period after Conan had become King of Aquilonia. Conan loses his kingdom and spends most of the book trying to regain it. This has the advantage for the author of offering opportunities to show Conan as a king commanding armies and also undertaking the kinds of solitary adventures we expect from a sword and sorcery hero, in which he must rely entirely on his own wits and his own strength and indomitable courage. The Hour of the Dragon was written at the suggestion of a British publisher and Howard’s idea was presumably to offer an overview of Conan’s character and accomplishments as both monarch and lone hero.

Conan’s problems begin with a plot by ambitious neighbouring rules and would-be rulers and a sorcerer who undertakes a particularly daring feat of magic - he brings back to life an infamous sorcerer, Xaltotun, who had died three thousand years earlier. The world of Hyboria had been very different in Xaltotun’s day. The dominant kingdom had been Archeron, a kingdom now only dimly remembered for its cruelties. Xaltotun is a sorcerer of immense powers, powers that exceed those of any sorcerer living in Conan’s age.

Xaltotun is restored to life by a magical gem, the Heart of Ahriman, a gem that ironically provides the only possible counter to the long-dead wizard’s magic. The gem can nullify Xaltotun’s sorceries, which is why the newly revived wizard is determined to keep it in his own possession. He would prefer to destroy it but unfortunately for him such a thing is impossible.

With the aid of Xaltotun’s evil magic Conan is stricken grievously ill on the eve of a crucial battle and Conan’s armies are defeated and routed. Valerius is placed on the throne of Aquilonia. Valerius and the king of neighbouring Nemedia plunder the land unmercifully. They believe they are safe to do so, Conan having perished in the decisive battle that lost him his throne. They would be a good deal uneasier if they knew the truth, that Conan is most certainly not dead.

Conan might be alive but regaining his throne seems all but impossible. Even a mighty hero like Conan is powerless against Xaltotun’s evil magic. Conan will find however that he has some unlikely allies in the shape of an elderly witch and a shunned religious cult.

In the process of trying to regain his kingdom Conan will find himself having to take up some of his old occupations, such as thieving and piracy.

In the person of Xaltotun The Hour of the Dragon has a memorably nasty villain who proves to be a very formidable opponent indeed. There are some notable lesser villains as well but they are overshadowed by Xaltotun, and indeed they are themselves very much afraid of Xaltotun.

There’s everything you expect in a Conan tale - an abundance of action, some romance, plenty of hints of sex and it’s all done in Howard’s inimitable style. Very few writers have ever approached Howard’s ability to handle action scenes or his ability to maintain a breakneck narrative pace. Almost as impressive are his knack for achieving a mood of brooding evil and his skill in creating an atmosphere of extravagant barbaric savagery and splendour.

Howard was very much a pulp writer and he can be accused of the usual sins of pulp writers - he wrote quickly and was not overly concerned with polish. Nonetheless this is a well-constructed and immensely entertaining adventure tale by the greatest of all sword and sorcery writers. Highly recommended.