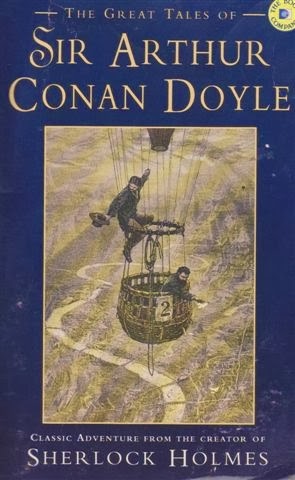 The Sherlock Homes stories weren’t the only mysteries written by Sir Arthur Conan Doyle.  Some of his other short fiction in this genre can be found in a collection called Great Tales, which includes his Tales of Terror, Tales of  Mystery and Tales of Pirates. As these titles imply, Conan Doyle’s short fiction ranged over many different genres.

Tales of Mystery includes six stories.  The Lost Special and The Man with the Watches are both railway mysteries, and I must confess I dearly love mysteries involving trains. The Lost Special in particular is a great little story, and is quite literally about a train that disappears.  The Japanned Box is a mystery, though not a crime story, and involves a man trying to escape his past.  It’s a bit sentimental, but strangely moving. To reveal anything about The Beetle-Hunter would be to give away spoilers, but it’s a good story, and it is about beetle-hunters.

The Jew’s Breastplate concerns relics of great antiquity and immense value in a museum, relics which may or may not be the target of an ingenious thief.   I think these stories compare very favourably to the Sherlock Holmes stories.  They’d be perfect for TV adaptation, if anyone was prepared to take the risk of doing something different rather than yet another version of The Hound of the Baskervilles.

The Tales of Terror are equally interesting, especially The Brazilian Cat (yet another Conan Doyle story involving exotic wildlife and hot-blooded South Americans) and The Case of Lady Sannox, which opens with a well-known society beauty unexpectedly taking the veil, and a prominent London surgeon reduced to a babbling wreck.

This Conan Doyle collection (Great Tales by Conan Doyle) also includes his Tales of Pirates.  And who can resist a pirate story?  His pirate stories chronicle the career of the notorious cut-throat John Sharkey.  The Dealings of Captain Sharkey with Stephen Craddock and How the Governor of Saint Kitt's Came Home both have the sorts of clever plot twists that you’d expect from the creator of Sherlock Holmes.  The Blighting of Sharkey has a twist of a different sort.  Sharkey is a fairly nasty piece of work, more ruthless and bloodthirsty than most fictional pirates.  Conan Doyle was able to make him vicious because he’s more villain than hero, although he is also both intelligence and brave.

Some of these stories are quite dark, almost gothic adventure stories.  Tales of Pirates also includes A Pirate of the Land (One Crowded Hour) which is one of those strange little offbeat stories that Conan Doyle wrote from time to time, and which I find rather appealing.  If you’re into pirates it’s well worth checking out these stories, although I must confess I don’t know how difficult they’re going to be to get hold of.
Posted by dfordoom at 6:28 AM