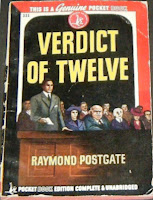 Raymond Postgate’s Verdict of Twelve was enthusiastically recommended by Raymond Chandler in his famous essay The Simple Art of Murder, so of course I had to track it down and read it. And it has to be admitted that it takes a very original approach to the mystery genre.

The book was originally published in 1940. Postgate had been a communist in the 30s (a sort of Oxbridge champagne socialist) and remained a socialist for the rest of his life. He has a reputation for having given a political spin to the handful of mystery novels he wrote, but mercifully that tendency is unable to ruin what is a rather fascinating novel.

Its most unusual feature is that it focuses on the jury in a murder trial. We get a potted biography of each juror, and a strange collection of people they are (including an unconvicted murderess). That takes up the first third of the book.

We then move on to the actual plot, a murder that may or may not actually be murder. An eleven-year-old boy named Philip lives with his aunt and guardian, Rosalie van Beer. She is an extraordinarily unpleasant woman and does her best to make Philip’s life a misery. This culminates in the extraordinarily cruel killing of the one thing Philip loves, his pet rabbit.

Shortly afterwards Philip becomes ill, and within a short space of time he is dead. Rosalie had a very strong motive for killing him - he was all that stood between her and a very considerable inheritance. Added to her general viciousness it’s not surprising that foul play is suspected, especially in view of the very unusual circumstances of Philip’s death. All this occupies the second third of the book, after which we move on to the trial.

Now the focus is back on the jury, and on the very long process by which they eventually reach a verdict. Rosalie van Beer was a nasty piece of work, of that there is no doubt, but does that necessarily make her a murderess? The evidence is compelling, but entirely circumstantial. When they start their deliberations it is obvious that even after hearing all the evidence most of the jurors still have no idea what their verdict should be. The dynamics of the jury room and the complicated interactions of the twelve rather unsatisfactory jurors will decide the issue.

It’s certainly an unusual approach. Most mystery novels end with the arrest of a suspect and disregard the trial altogether. Those that do deal with the legal processes (such as Erle Stanley Gardner’s Perry Mason legal mysteries) tend to concentrate on the personalities of the lawyers involved. Juries are simply twelve faceless persons. Verdict of Twelve reminds us of what a curious animal a jury is.

Apart from its originality this novel also has a strong plot that keeps us guessing until the end. Every reader will undoubtedly have formed certain conclusions, but it is impossible to be sure that those conclusions are sound. For one thing, just as in a real murder case, we have to judge the case ourselves based mostly on the evidence that is brought forward at the trial and we know that our information is incomplete.

Verdict of Twelve presents us with many vivid characters, almost all of whom are to some extent unsavoury. This is not an optimistic mystery novel - it does not lead us to believe that a verdict in a trial has anything to do with truth or justice. Despite this it’s an entertaining book and its very unconventionality makes it more or less a must-read mystery. You might not approve of its approach but it’s worth giving it a chance.
Posted by dfordoom at 5:47 PM