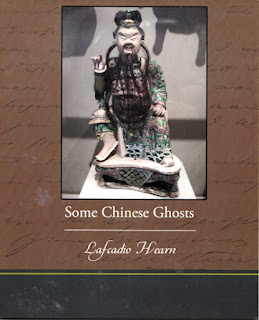 Some Chinese Ghosts, published in 1887, comprises Lafcadio Hearn’s retellings of a number of Chinese ghost stories. If you’re expecting conventional ghost stories some of these tales will come as a surprise. They’re not really horror stories. Some of these ghosts are not merely benign but actively good and helpful to the living, and some are perhaps not really ghosts at all.

Lafcadio Hearn (1850-1904) was born in Greece and brought up in Ireland. He relocated to the United States at the age of 19 and earned his living as a journalist. In 1890 he visited Japan and he fell in love with the country, remaining there until his death and becoming a naturalised Japanese citizen. He is best known for his writings about Japan, especially his classic volume of Japanese ghost stories, Kwaidan: Stories and Studies of Strange Things (which was made into a superb movie by Masaki Kobayashi in 1965).

Some Chinese Ghosts shows that Hearn was already fascinated by the Orient even before his move to Japan.

This is a very slim volume and contains six very short tales. They are not translations but stories based in some cases on ancient Chinese tales or in other cases on various snippets of folklore. Hearn’s style is elegant and the stories are like tiny jewels, intricately wrought and beautiful. Hearn was not concerned with linking the stories together but with capturing a particular mood of weird beauty, and he succeeds admirably.

The Chinese concept of a ghost is clearly very different from what we are accustomed to in the west. The existence of ghosts is taken for granted and while ghosts may be malignant they are much more likely to be benign or even benevolent. Mortals can fall in love with ghosts and live to tell the tale. These are not horror stories although they are certainly tales of the supernatural.

The Story of Ming-Y is the closest these stories come to what we in the west would consider a conventional ghost story, and it’s a small treasure of a story, the tale of a young man who thinks he has fallen in love with a woman when he has actually fallen in love with a ghost. Even here the mood is more one of gentle melancholy than of terror.

The Legend of Tchi-Niu is another tale of a mortal in love with a ghost but this ghostly encounter is no punishment for meddling in forbidden things; it is a reward for virtue.

This volume also contains a fanciful tale of the discovery of the tea plant and another tale of the gods who taught men to make porcelain, and of the price one man pays in order to create porcelain of the most exquisite beauty. It is a high price but he will be rewarded for his sacrifice.

An odd but enchanting little collection.
Posted by dfordoom at 12:07 AM