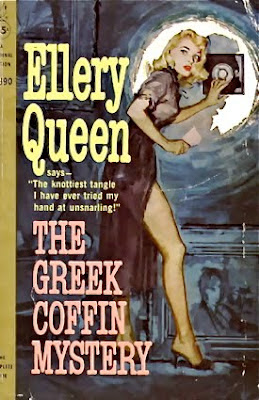 The Greek Coffin Mystery marks my long overdue introduction to Ellery Queen. Published in 1932, this really is the apotheosis of the golden age detective story. The starting point for the story is the death of a New York art dealer of Greek ancestry. After the funeral it is discovered that his will has disappeared. This sets off a chain of events involving murder and art, a chain of events that almost manages to baffle the great detective himself.

Ingenious is an inadequate word to describe the immense complexity of the plot. And it has to be admitted that when the author issues his “Challenge to the Reader” (which was apparently a feature of all the early Ellery Queen novels) claiming that the reader now possesses all the clues needed to solve the mystery, and that there is only one possible solution that fits exactly, he really isn’t kidding. All the clues really are there, and it really is impossible for anyone else to have committed the crime. The skill with which the trail of clues is laid is breath-taking.

It’s not just the twists and turns of the plot that makes this such a marvellously pure embodiment of golden age crime fiction. It takes the lack of interest in psychology and characterisation that distinguishes this form to an extreme that I don’t think has ever been surpassed. The characters exist, and act, solely to serve the demands of the plot. This can be seen as a flaw, but in reality it’s part of the charm of this type of detective tale. It takes the reader into a world governed entirely by the rule of reason, a world in which any puzzle can be solved by the exercise of logic and the rules of deduction.

If you accept it on its own terms it works brilliantly. And it’s great fun
Posted by dfordoom at 7:33 AM