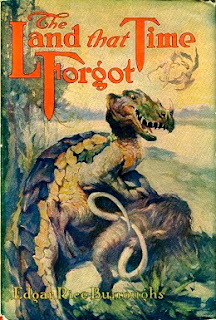 The whole trilogy is a fun pulpy tale of encounters with terrifying creatures, of improbable escapes and dashing heroism, and of three unexpected love stories. It’s the truly strange nature of Caspak itself though that is most disturbing and most memorable. If you like your weird fiction with extra weirdness then this certainly qualifies.
Posted by dfordoom at 6:53 AM