The Germans on Venus 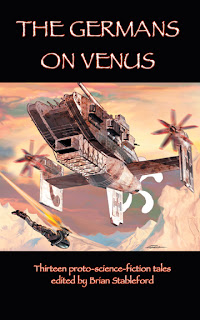 The Germans on Venus is Black Coat Press’s second volume of early French science fiction. As was the case with their earlier anthology, News From the Moon, the stories were translated by Brian Stableford who also provides one of his usual illuminating introductions.

The stories range in date from 1796 to 1921. Stableford describes these stories as scientific romances rather than science fiction although the distinction between the two genres is not always clear.

As in any anthology the quality of the stories varies widely. Stableford’s own tastes are somewhat outré so it is not surprising that some of these tales are idiosyncratic to say the least.

The title story, written by André Mas in 1913, was intended in part at least as propaganda. It is in fact a novella rather than a short story. With France apparently the dominant military power (at least that was the view of most people prior to the Great War) and with Britain undisputed mistress of the seas Germany has only one direction in which her own desire for glory can be satisfied - she must turn her haze heavenwards. Thanks to some extraordinary technological ingenuity the means of doing so are available. A kind of giant flywheel generates enough centrifugal force to launch a spacecraft on a mission to Venus. The intention was not to land but due to unforeseen circumstances they do in fact land, and claim Venus for the German Empire.

The story reflects the tense international situation in 1913 and the fairly widespread anxieties about Germany’s growing power and (to an even greater extent) her growing ambitions.

Of the other tales collected here the best is probably Rémy de Gourmont’s The Automaton. Like most of the other stories it is very different in nature from what we today think of as science fiction, but it’s a clever tale.

Louis Mullem’s 1909 story A Rival of Edison anticipates the invention of television. Charles Nodier’s Perfectibility is an outrageous satire on intellectuals and their belief in the perfectibility of human institutions. Jules Lermina’s Quiet House is a slightly creepy tale of two scientists who have discovered that food is no longer necessary, although the results of their experiments are unfortunate for the family of one of them.

Adrien Robert’s War in 1894 deals with chemical warfare. Théo Varlet’s Telepathy (published in 1921 making it the most recent of the stories collected here) deals with both drugs and telepathy.

This is in my opinion a slightly weaker collection than News From the Moon, but it’s still worth a look if you enjoy both early science fiction and unconventional science fiction.
Posted by dfordoom at 3:35 AM