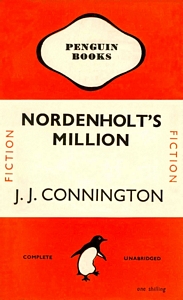 Alfred Walter Stewart (1880-1947) was a distiguished British chemist who wrote very successful golden age detective stories under the pseudonym J. J. Connington. He also wrote one science fiction novel which became a classic of its type.

Nordenholt’s Million, published in 1923, belongs to the post-apocalyptic sub-genre of science fiction. An accident produces a particularly virulent strain of denitrifying bacteria. These bacteria have the effect of removing nitrogen from the soil. In normal circumstance they do no harm but this virulent strain proves to be catastrophic in its effects. It transforms rich farmlands into wastelands.

The novel was clearly set in the near future, an age in which large-scale air transportation has made communication and travel over long distances safe, convenient and rapid. This proves to be humanity’s undoing as it allows the devastating bacteria to colonise one part of the Earth after another. Britain’s grainlands are the first to be affected but soon the food-producing areas of the United States, Canada, Argentina and Australia are similarly ravaged. Humanity faces famine on a scale never before imagined. In fact the famine will be on such a gigantic scale that the survival of civilisation, and even of the human race, seems to be in the gravest peril.

The British government does what all democratic governments do in a crisis. It calls meetings. It arranges conferences. It begins talks. It discuses option. It sets up committees. But in fact none of the options considered has the slightest chance of success, or of preventing the deaths of countless millions.

In this crisis one man emerges who sees clearly what has to be done. His plan seems brutal but it is the only way in which something can be salvaged from the wreckage. Nordenholt is a fabulously wealthy financier who has little interest in finance. His interest is in people, and in what makes them tick, and in the ways that people can be persuaded to do things. He is not interested in power as such, but he is keenly interested in the workings of power. And he is the one man who not only sees what has to be done; he has the energy to carry out his mission.

Some readers have seen Nordenholt as a monster or even a fascist. This is rather unfair. Connington is at pains to explain Nordenholt’s character to us, and Nordenholt is a man of exceptional humanity. He is simply clear-sighted enough to realise that the choice is between saving part of humanity or in letting all of humanity perish. Nordenholt is a man who likes humanity too much to stand by and see it destroyed completely. The steps which need to be taken involve serious ethical dilemmas but Nordenholt’s plans at least offer some hope.

Nordenholt’s plans encounter countless obstacles. The denitrifying bacteria leaves the soil useless. The nitrogen can be replaced but the process requires enormous amounts of power. It is doubtful if enough power can be produced over a long enough period to produce enough of the precious nitrogenous mixture that offers the only hope that there will be a harvest the following year. There is a faint ray of hope though - the brilliant physicist Henley-Davenport has been working on a project to unleash the practically unlimited power of the atom. If he can succeed then atomic power might produce the power that is needed.

While it’s a gripping story of survival the core of the book lies in the moral dilemmas faced by the leaders of the survivors. Survival can only be achieved by making decisions that seem impossibly brutal. And is survival worth the cost if the cost is the end of civilisation as we know it? This is a story of hope but also a story of tragedy. The tragedy is not limited to the deaths of millions; it also embraces the death of a whole way of life.

If he is to save the remnant of humanity Nordenholt will need to assume a degree of power that will make him a dictator. A democratic government simply will not and could not make the decisions that are necessary. This assumption of dictatorial, powers is necessary but there is a price to pay, and Nordenholt will have to pay the price as well. Can a man achieve unlimited power without being corrupted, and without losing his own humanity? In 1923, with the horrors of the First World War still a vivid memory and with the age of the dictators already beginning in Italy and Russia these questions assumed immense importance. Many intellectuals persuaded themselves that totalitarianism was both necessary and desirable (and many intellectual today still seem to share those beliefs). Connington was at least able to see the inevitable consequences and to understand the price that would have to be paid. Connington understood the realities of power and he understood that leaders sometimes have to accept a necessary evil if it is the lesser of two evils. Connington could see the advantages of totalitarianism but he could also see the costs.

Nordenholt’s Million is one of the more interesting early post-apocalyptic science fiction stories, offering a more thorough examination of the social, cultural and political consequences of disaster. Recommended.
Posted by dfordoom at 9:20 PM