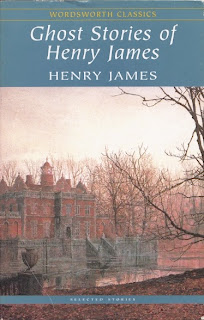 Ghost Stories of Henry James is a Wordsworth collection that includes James’ best-known ghostly tale, The Turn of the Screw, plus nine short stories.

So much has been written about The Turn of the Screw that to say any more would be superfluous. Suffice to say it’s one of the great examples of subtle and ambiguous horror, a story of a governess who believes she must save two children from a ghost.

The other stories also mainly fall into the category of subtle and ambiguous horror, but are on the whole much less successful. James was either unable (or unwilling) to provide his readers with the kind of payoff they are entitled to expect in a ghost story. Being subtle and ambiguous is fine but a ghost story must at the very least make us uneasy. It doesn’t have to scare us out of our wits. Some of the best horror stories are not especially terrifying but they do give us a sense of unease, a sense of the uncanny, a feeling that things are not quite right. Most of these stories fail to do this.

Of course it can be legitimately argued that James was not consciously writing horror or even ghost stories, that he had other purposes, other agendas. That’s quite true but when a collection is put before the public as being a collection of ghost stories then I think the reader is entitled to judge those stories on that basis - on their success or failure as ghost stories.

Judged by other criteria some of these stories might well be considered to be good short stories. But a good short story is not necessarily a good ghost story.

The Private Life is a good example. It’s a clever examination of the idea that the face we show to the world is often very different from the face we show in private. It’s an amusing tale but as a tale of supernatural horror it’s a complete non-starter. The Friends of the Friends is interesting, a story of two people who seem fated never to meet, but again it’s not a story that will produce even the mildest unease. The Real Right Thing, about a man engaged to write a biography of a famous writer, is similar - an interesting idea but once again no actual sense of unease.

Sir Edmund Orme is closer to being an actual ghost story and although it’s somewhat unconventional it works rather well and is one of the more successful stories in this collection.

Owen Wingrave is a story in which James has tried to give us the payoff we expect but sadly it falls rather flat.

The Ghostly Rental is a surprising success. Surprising because it suffers from James’ worst flaws as a writer of ghost stories and yet it does give the reader a genuine frisson of horror. It’s a story of a man who caused his daughter’s death who must now collect rent from her ghost.

The Third Person is a humorous ghost story about a haunting that is brought to an end in a rather witty way. While it’s not the least bit scary it is a charming little story.

On the whole I’d say that this is a collection that may appeal strongly to fans of Henry James. They will find an assortment of stories that demonstrate the author’s skill as an observer of social mores and human behaviour. Fans of the ghost story are likely to be much less satisfied. It’s a volume that unfortunately I really cannot recommend to anyone looking for classic ghost stories.
Posted by dfordoom at 12:49 AM