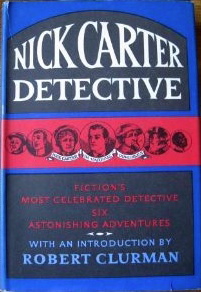 The argument over the title of best-ever series detective could keep us gainfully employed until Doomsday. But when it comes to the detective who has made the most appearances before the reading public there can be little doubt that Nick Carter carries off the prize.

In his heyday he appeared in around a thousand stories. His first appearance was in a Street & Smith dime novel in 1886. He continued to make regular appearances until 1915. The character was revived in the 1930s. Nick Carter novels were still being published in the 1950s. In the 1960s Nick Carter was revived yet again to serve as the lead character in several hundred spy novels.

Nick Carter is what would later be called a private detective (or perhaps it would be more accurate to describe him as a consulting detective in the Sherlock Holmes style) although his cases always seem to be far more interesting and exciting than any real-life private detective could hope to see. He is based in New York but his cases take him all over the country and even on occasions onto foreign soil.

The original Nick Carter stories carried no author’s credit. It is known that the first story (and quite a few more) was written by John Coryell. It is also known that Frederick Van Rensselaer Dey (1861-1922) wrote a very large number. Frederic William Davis and Eugene T. Sawyer were among the many other authors contributing to the series. The demand for Nick Carter stories was always too great to be satisfied by a single writer.

In 1963 Robert Clurman collected six of the original stories, written between 1891 and 1902, in Nick Carter, Detective.

You don’t expect a great deal of polish in detective stories that originally saw the light of day in dime novels and pulp magazines, but what can be said for these six stories is that they are hugely entertaining. The plots are extraordinarily (and delightfully) outlandish. Almost every house seems to contain at least one secret passageway. Nick never misses an opportunity to don a disguise, something he is able to do almost instantaneously and without any preparation. One assumes he carries the necessary props and makeup with him at all times, as well as carrying pistols, tools for breaking and entering and a myriad other useful items. His clothing must have contained an extraordinary number of pockets!

The villains also adopt disguises. Disguises were a positive obsession with Victorian and Edwardian writers of crime fiction.

The bad guys are straightforward villains, with no redeeming qualities. They may be vicious and ruthless but they are certainly imaginative if we are to judge by the bizarre criminal schemes they come up with. Some are almost clever enough to qualify as diabolical criminal masterminds although we have few doubts that Nick Carter will get the better of them. A handful do escape, only to pop in other stories where eventually our hero brings them to inevitable and inexorable justice.

Most of the stories ran to around 25,000 words and they are packed with a good deal of plot and a great deal of action, necessitating a very brisk pace. Subtlety was not a requirement and it’s a quality that is consequently in short supply. That’s not a problem. It’s the sheer outrageousness of the plots that makes them so enjoyable.

Nick Carter is a very Victorian type of hero. You certainly won’t find this detective resorting to cocaine to stave off boredom. He has in fact no apparent vices at all. This could have made him irritating but the frenetic pacing of the stories leaves the reader with no time to become irritated. Carter does make occasional mistakes and he does not always get his man (not the first time anyway) so that makes him a bit more human. He also has a habit of getting himself captured and/or roughed up by the bad guys, but of course we know they will be able to hold Nick Carter for long.

There are murders aplenty but in common with most of the crime fiction of the late 19th and early 20th centuries this detective’s cases cover a wide range of crimes, from kidnapping to jewel robberies to fraud to counterfeiting. Whatever the crime you can rest assured it won’t be something like mere burglary - Nick Carter’s adversaries are too dastardly to trouble themselves with such mundane and relatively innocuous crimes.

There is little in the way of love interests in these six stories although there must have been some romance in some of the stories since Nick Carter managed during the course of her career to get himself (albeit briefly) married off. Women do play an important role in some stories, either as virtuous heroines or wicked villainesses.

These tales are very much of their time, and as such are mercifully free of any vestiges of political correctness. For me one of the great attractions of the crime fiction of the past is that they present us with a vivid and unvarnished snapshot of the past.

These stories are very very pulpy with a minimum of literary polish and with plots that require a great (one might even say herculean) effort to sustain the necessary suspension of disbelief. In spite of, or possibly even because of, these flaws these stories are deliciously exuberant fun. Highly recommended.
Posted by dfordoom at 12:50 AM