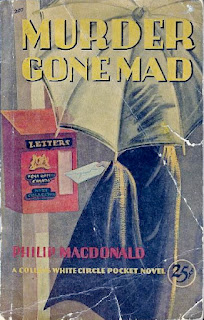 Philip MacDonald’s 1931 crime novel Murder Gone Mad is an interesting early example of a sub-genre that would eventually come to dominate the entire crime genre - the serial killer novel.

Nothing exciting has ever happened in Holmdale Garden City in England until one day the residents discover to their horror that there is a maniac loose among them, a maniac who kills apparently without reason.

That is of course the fatal weakness of the serial killer sub-genre - serial killers choose their victims randomly so the sorts of clues that usually lead fictional detectives to their quarry can no longer be depended upon. This leads to uninteresting plots that then need to be spiced up by lots of gory detail. Philip MacDonald however does something different. He sets up his plot rather cleverly so that the murderer can only be one of a small group of people, and all these people are known to the detective. As a result he is able to structure his book according to the well-established rules of golden age detective stories.

Detective-Superintendent Arnold Pike is up against more than the usual challenges in solving this case, and he makes use of modern technology to hunt the killer. In 1931 moving pictures were still fairly high-tech and Pike uses movie cameras in order to narrow down the field of possible suspects. Golden age detectives are more often than not rather hostile to the use of technology in criminal investigation so this is another factor making this an unusual crime novel for its era.

While gore is an inseparable part of the modern serial killer novel you won’t find any of that in this book. Serial killer novels also tend to be somewhat obsessive about psychology but Murder Gone Mad is still very much a golden age tale with psychology taking a back seat to good detective work.

An odd but entertaining example of 1930s crime fiction. Worth a look.
Posted by dfordoom at 5:11 PM