No Good from a Corpse 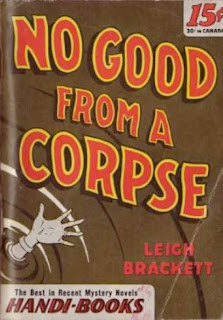 Leigh Brackett (1915-1978) was already enjoying reasonable success as a science fiction writer when in 1944 she decided to try her hand at a hardboiled mystery. No Good from a Corpse was sufficiently successful to attract the attention of Hollywood and Brackett soon found herself working on the screenplay for Howard Hawks’ 1945 adaptation of Raymond Chandler’s The Big Sleep.

Brackett went on to have a successful career as a screenwriter, which included several more scripts for Howard Hawks. She is possibly best known today for her last screenplay, for The Empire Strikes Back.

No Good from a Corpse is a book that ticks all the hardboiled boxes.

Edmond Clive is an LA private eye. He is offered a case that he really does not want, the reason being that the client is Mick Hammond. Clive and Hammond grew up together as kids but they’ve hated each other for years. The trouble started over a woman but Ed Clive has other reasons for disliking Hammond. Hammond is, to put it mildly, a louse. He uses women to get what he wants, and he always gets what he wants.

Now Hammond is scared. His wife Jane is also scared, so scared that she’s prepared to beg Clive to take the case. Clive starts to weaken and agrees to talk to Hammond, at which point Clive gets shot. The bullet was obviously meant for Hammond.

Clive is also worried about Laurel Dane. He’s been in love with her for years but Laurel is not exactly a one-man woman. She also happens to be involved in some way with Mick Hammond.

That night a murder occurs and Ed Clive finds he no longer has a choice. He is involved in the case with Mick Hammond whether he likes it or not. Both he and Mick are regarded by the police as suspects and in order to clear himself Clive is going to have to solve this case. And a very complicated case it proves to be, involving blackmail and poison pen letters as well as multiple homicides.

Clive also finds himself involved with a rich assortment of unsavoury characters - crooked private eyes, deranged alcoholics, insane ex-cons and as many no-good dames as you could wish for.

At times it seems like the plot might be in danger of collapsing under the weight of its own complexity but Brackett manages to tie it all together in the end fairly effectively.

Brackett certainly has no difficulty with the hardboiled style. She has a fine ear for dialogue and the characters trade wise-cracks in the finest style of the 1940s Hollywood crime movie. The book has the right atmosphere and the right tone. There’s also a considerable leavening of cynicism, an attribute that made her an obvious choice for writing film noir screenplays like The Big Sleep.

Edmond Clive is a hardbitten tough guy with a sensitive side, again very much in the mould of the popular Hollywood idea of the private eye.

Brackett was one of only a handful of women to write in the hardboiled style. She wrote in several other genres as well and seemed to have the knack for writing well in whichever genres she attempted.

No Good from a Corpse is thoroughly enjoyable hardboiled fun. Recommended.
Posted by dfordoom at 7:31 PM