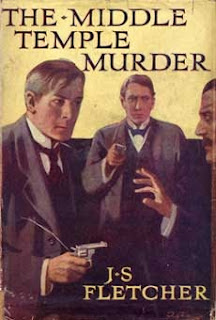 J. S. Fletcher’s The Middle Temple Murder is an early example of the golden age detective story (it was published in 1919).

Joseph Smith Fletcher (1863-1935) was an incredibly prolific British author in a variety of genres. In 1914 he started writing detective novels and went on to write more than a hundred.

The Middle Temple Murder begins with the discovery of a body in a lane. One of the first people on the scene is Frank Spargo, a sub-editor on The Watchman. Spargo sees the case as an opportunity to make a name for himself as a journalist but he is also fascinated by the case itself. He’s even more fascinated by the process of solving the case.

No papers or money were found on the body and the dead man’s identity remains unknown for quite some time. Spargo strikes up a friendship with Detective-Sergeant Rathbury of Scotland Yard and they agree to exchange information while they continue their investigations independently.

These investigations will eventually uncover a strange story involving embezzlement, Australian diamonds, valuable stamps, orphans with mysterious antecedents and a coffin that may or may not be empty. It seems that nobody involved in the case is who he claims to be.

There are several interesting features to this book. Spargo and Rathbury conduct their investigation independently but the book focuses entirely on Spargo. The reader only knows what Spargo knows.

Spargo’s method of crime-solving is also unusual. He has a very strong belief that the best way to solve a murder is to let the public solve it. Give a case enough publicity and eventually people will come forward with the information you require.

There’s also a romantic sub-plot involving Spargo and the daughter of one of the chief suspects. Those who disapprove of romance in detective stories need not fear - Fletcher’s main focus is always on the criminal investigation.

Spargo is young and rather cocky but he’s also a rather decent young man with strong moral principles. He’s a hero the reader should have no trouble liking.

The plot has plenty of twists and red herrings. There is only one murder but there are several crimes including some going back twenty years before the murder.

Fletcher has a pleasing style. He’s literate without being pretentious. He also has a knack for creating colourful and interesting minor characters, and for creating atmosphere. The scenes in Market Milcaster, in a decaying town living on dreams of its former greatness, are especially well done.

The Middle Temple Murder can be unhesitatingly recommended to all fans of golden age crime fiction.
Posted by dfordoom at 4:31 AM