The Case with Nine Solutions 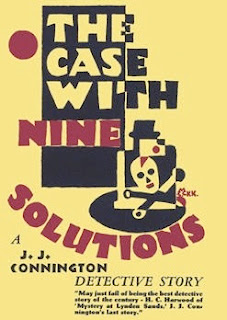 J. J. Connington’s The Case with Nine Solutions, published in 1928, is fairly typical of the crime fiction of the 20s although it does go very close to breaking one of the cardinal rules of golden age detective fiction.

Connington (real name Alfred Walter Stewart), was born in Glasgow in 1880 and had a distinguished academic career as a chemist. He is best known as the author of the early science fiction classic Nordenholt's Million, published in 1923. He wrote seventeen crime novels. He died in 1947.

The Case with Nine Solutions has a very intricate plot and a surprisingly high body count - it involves no less than four murders! The first murder is discovered by accident. A Dr Ringwood is called out to a case on a very foggy night and goes to the wrong house by mistake, where he finds a dying man. The man has two gunshot wounds, including a lung would that proves fatal. The Chief Constable, Sir Clinton Driffield (who figures in several other mysteries by Connington), arrives on the scene. The house does not have a telephone so in order to ring for the coroner he has to go to the house next door, where he finds a second body. Ironically this is the house the doctor had been called to.

Sir Clinton and Inspector Flamborough receive a series of mysterious letters that appear to come from an eyewitness to the crimes. The first of these missives leads to the discovery of the third body.

There is a fairly obvious suspect for at least two of the murders but unfortunately for Sir Clinton this suspect could not possibly have committed the third murder, and since the three murders are obviously connected this seems like a fatal objection. And as the investigations proceed it becomes clear that there are several other equally promising suspects. And then comes the discovery of a fourth body. Even more distressing is the possibility that not all the killings are actually murders.

While Inspector Flamborough is technically in charge of the case it is Sir Clinton who takes the leading role. In fact Flamborough functions as a kind of Dr Watson, allowing Sir Clinton to explain key details of the plot. Poor Flamborough turns out to be something less than a detective of genius. Driffield is very much in the mould of the brilliant detective who sees through the fog of multiple suspects and red herrings and knows who the killer is from a very early stage. But of course both Flamborough and the reader are kept in the dark. Excessively brilliant detectives can sometimes be irritating and Driffield’s habit of pointing out Flamborough’s analytical deficiencies might have that effect on some readers.

As you’d expect from the author’s background chemistry plays a crucial role in the plot. Most of the characters involved in the case work in a chemical research institute and their knowledge of chemistry has an important bearing on their possible guilt.

Connington’s style is fairly straightforward without ever being dull.

The novel ends in a rather more apocalyptic way than is usual in golden age detective fiction.

The plot is tied together cleverly enough but the bending, if not the outright breaking, of the cardinal rule mentioned earlier might be disapproved of by golden age purists. On the whole though it’s fairly entertaining and certainly worth a look.
Posted by dfordoom at 5:02 AM