The Haunted Hotel and Other Stories 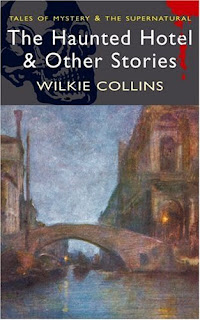 English novelist Wilkie Collins (1824-1889) was one of the most successful writers of the so-called “sensation novels” which were so popular in the 1860s and 1870s. Collins enjoyed a close friendship with Charles Dickens.

In fact only a few of these stories are conventional ghost stories. The others could be described as tales of terror, tales of the uncanny or (perhaps most appropriately) as weird fiction. Some of the stories very definitely involve the supernatural. One or two contain no such elements whatsoever. In the majority the reader is left to decide if anything truly supernatural has occurred. The only thing that all these stories have in common is that they are all either very good or at the very least uncommonly interesting - this really is a very strong collection.

The title story is a fascinating mix of mystery fiction and the gothic, although of course such genres were quite unknown at the time. What makes it intriguing is that it takes Collins a very large portion of the book’s fairly short length to let us know exactly what type of story it is. And even at the end there remains some doubt. Until quite late in the tale we’re not even sure that anything criminal or mysterious has actually happened. We have a series of   mildly questionable occurrences that appear to have plausibly innocent explanations, but while one such event might not arouse our suspicions, it’s the combination of events that causes us to have doubts. This technique actually works extremely well.

By the standards of many later crime novelists Collins was more interested in character and in social relations than in merely creating a puzzle to be solved. The combination of mystery and gothic elements and the introduction of what seem to be ghostly influences are handled quite skillfully. The way in which Collins unfolds his plot is more interesting than the plot itself, but it’s still an effective and highly entertaining story.

In The Dream Woman a man who has made a very unfortunate marriage believes his wife intends to kill him. He sees her attempting to kill him in a dream. Is the dream a true foretelling of the future or merely the product of his own fears?

Miss Jéromette and the Clergyman deals with events in the past. A man was acquitted of murder but an elderly clergyman on his deathbed believes he knows far more than was revealed at the trial. There is no element of the supernatural but the mood is gothic enough.

In The Dead Hand a man finds himself spending the night in an inn with a dead man. Or at least with what appears to be a dead man. Nine O’Clock is another tale dealing with the relationship between the past, the present and the future. A condemned man, an early victim of The Terror in France, knows the exact time at which he will meet his death although no time has yet been set for his execution.

In Mrs Zant and the Ghost a woman believes she has been contacted by her dead husband, although she has neither seen nor heard him. And she believes he will protect her although she does not know what it is she will need protection from. The Devil’s Spectacles are exactly that - a pair of spectacles presented to a man by the Devil. The spectacles allow the wearer to know what is in other people’s hearts, but does anyone really want to know such things?

Collins achieves his gothic effects with great subtlety. There are no ruined castles or decaying mansions, no clattering chains in the night, no spectral visions. The mystery of human life, ordinary human desires and fears - these are sufficient material for Collins, material with which he manages to create an atmosphere of the uncanny and at times a considerable sense of dread. For those whose tastes run to subtle horror this collection can be very highly recommended.
Posted by dfordoom at 5:11 AM