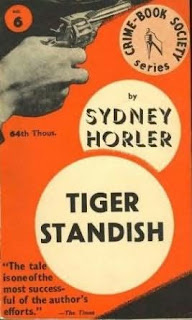 Sydney Horler belonged to the breed of thriller writers that Alan Bennett described as the “snobbery with violence” school. When crime writer Colin Watson wrote his 1971 book on British crime fiction (for the title of which he borrowed Bennett’s quote) he was especially vituperative about Horler’s thrillers. Watson’s intense dislike of this writer convinced me that Horler was someone whose work I was going to enjoy. Anyone disliked by Colin Watson can’t be all bad.

Tiger Standish follows the Bulldog Drummond template very closely. The hero is clearly modelled on Captain Hugh Drummond. The Hon. Timothy “Tiger” Standish is the son of Lord Quorn. He works on a freelance basis for a British counter-espionage agency named Q1. A hero of this type is bound to be a very athletic sort of chap and as it happens Standish is an outstanding football player. Somewhat oddly though he plays soccer rather than rugby, which seems very surprising for a member of the aristocracy in 1932. Horler is at pains to reassure us that Standish is strictly an amateur player - to have been a professional soccer player would have involved a total loss of caste. So why did the author choose this particular sport for his hero? The answer is quite simple. Horler had written a number of popular football stories so making his new hero a football player was a good way of keeping in good with his established readership base.

Standish is of course a very heroic figure. Like Drummond he tends to rely on his fists rather than his brains but also like Drummond he is more quick-witted than he appears to be. He has the obligatory loveable manservant, in this case a former football player. Standish has all the other attributes we associate with heroes of his type - he is chivalrous, patriotic, impetuous and dislikes taking orders.

The plot is, again, very much in the Bulldog Drummond vein. While there’s no espionage involved we know that Standish has been involved in counter-espionage work in the past, which is a useful way to add a bit more glamour to the character. In this book Tiger comes up against a diabolical criminal mastermind of the usual type. This arch-criminal’s gang has been carrying out some clever jewel robberies. Tiger gets involved when a young woman named Sonia Devenish comes to him for help. Her step-father had committed suicide but Sonia has reason to believe he was in fact murdered. The step-father had been involved in some way with the activities of the aforementioned diabolical criminal mastermind.

Naturally Sonia manages to get herself kidnapped by the gang, which of course only makes Standish more determined to bring these arch-fiends to justice. Standish would have felt the same way had any young woman been in such a position but the fact that he’s fallen for the lady concerned adds to his determination.

There are the usual narrow escapes, there’s plenty of action and Tiger Standish gets to mete out his own personal brand of justice to various dastardly miscreants. Heroes of this school prefer to right their own wrongs rather than rely on the police.

Horler’s style is not quite as polished as the works of some of his rivals (such as Buchan). It’s a bit more pulpy but it has plenty of energy. The character obviously met with the approval of the reading public since Tiger Standish went on to figure in several more of Horler’s thrillers.

While it’s not quite up to the standard of Sapper’s marvellous Bulldog Drummond books this novel is still very enjoyable nonsense. If, like me, you have a great fondness for the Snobbery with Violence school you’ll want to check this one out. Recommended.
Posted by dfordoom at 12:35 AM