Astro, the Master of Mysteries 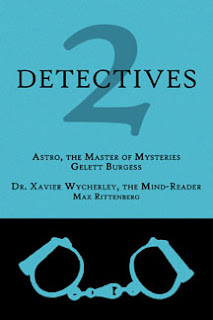 Astro, the Master of Mysteries is another entry in the occult detective genre and it’s another example of the surprising flexibility of that genre. It offers its own distinctive variation on the basic theme.

Gelett Burgess wrote the stories that comprise this collection some time before 1912 when they were first published in book form. They’re free-standing stories but there is a longer story arc as well, which is a fairly unusual feature for a collection of detective stories.

Astro is an astrologer, palm-reader, fortune-teller and psychic. He’s also a complete charlatan. You might think this would make him either a villain or at best a loveable rogue but in fact he’s very much the hero. You see, despite being a charlatan as a psychic Astro is a detective of genius. He uses the psychic angle to attract customers but when someone hires him to solve a mystery he always gives them their money’s worth.  Very few crimes are capable of baffling Astro.

Any good fictional detective needs a sidekick. Astro’s is the beautiful Valeska. She is a slightly unusual sidekick, being already a skilled detective who is being trained by Astro in the mysteries of the art of crime-solving. There is considerable mutual respect between Astro and Valeska, and there’s a hint that there may be more than respect involved. That’s where the longer story arc (which occupies the entire collection of twenty-four stories) comes in but I won’t spoil it by saying any more. The relationship between Astro and Valeska is as interesting as the actual cases they take on, although the cases are pretty interesting in their own right.

Astro is something of a scientific enthusiast, but he tends to use science more as an illustration of his pet theories than as a crime-solving tool. His interest in science is however an indication of his very logical mind. This, along with a profound understanding of human psychology, is the secret of his success as a detective.

Occult detectives were very much in fashion in 1912, but Burgess also makes use of another element that was in vogue at that time - the fascination with the Mysterious East. Astro himself is Egyptian, although he also claims to be a Buddhist. Astro’s exotic origins are certainly useful to his pose as a psychic but his mind seems to be very much a rational western mind.

The stories themselves cover a wide range of crimes. In some cases there is no actual crime, merely a puzzle that is causing distress to one of Astro’s clients. In other cases there are very real crimes, even involving murder.

Astro, the Master of Mysteries is a very entertaining collection. The stories work well as detective stories in the manner of the time. They don’t have the intricate plotting of the later golden age of detective fiction nor do they adhere rigidly to the so-called rules of “fair play” that characterised the golden age. Nonetheless they’re clever and Astro’s business as a professional psychic gives the tales a unique flavour.

Fans of both straightforward crime fiction and occult detective stories should find a great deal to enjoy here. Highly recommended.

This collection is included in one of Coachwhip Press’s 2 Detectives volumes, paired with Max Rittenberg’s Dr Wycherley collection The Mind Reader.
Posted by dfordoom at 8:24 PM