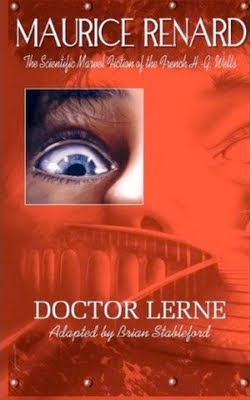 Maurice Renard (1875-1939) was another early 20th century pioneer of science fiction, or to use his own term for it, scientific marvel fiction. The Black Coat Press volume Doctor Lerne includes the novel of that name, a novella called Monsieur Depont’s Vacation and an essay of Renard’s on the subject of this genre of fiction.

Like most French writers of such fiction at that time Renard found that the reading public had a limited taste for such works although he did later achieve considerable fame with a mystery novel tinged with science fiction, The Hands of Orlac.

Monsieur Depont’s Vacation, published in 1905, was Renard’s first attempt at this newly emerging genre. There was a considerable vogue for dinosaurs at the time and this is one of the more interesting early attempts at a tale of dinosaurs loose in the modern world. It’s rather tongue-in-cheek in style and the highlight is the absurd but ingenious reasoning by which the scientist in the story convinces himself that it really is possible that an iguanadon and a megalosaur are wandering about the French countryside.

Doctor Lerne, published in 1908, is a much more ambitious and much more accomplished work. This is a classic mad scientist story. A young man, Nicolas Vermont, sets off to visit his uncle at his chateau. The uncle, Dr Lerne, has been conducting experiments in grafting and tissue transplant. It appears that he has made some colossal breakthroughs but there are several things that his nephew finds extremely disturbing. His uncle seems strangely changed and fails to recognise his nephew. His handwriting has altered, and he seems to have picked up a slight German accent. Nicolas’s assumption is that this is a result of Dr Lerne’s long and close collaboration with his three German assistants.

Nicolas however cannot shrug off all his misgivings. When he finally gains access to his uncle’s laboratory he is horrified by what he finds. Dr Lerne has not only been transplanting organs from one species to another, he has even performed transplants from plant life to animal life. And this is only the beginning. Dr Lerne believes it may even be possible to break down the barrier between men and machines. Nicolas is the proud owner of a powerful and very advanced motor car, a machine so sophisticated that the scientist believes that machine life is a distinct possibility.

It’s an entertaining mixture of horror and science fiction packed with original and ambitious ideas. Certainly one of the neglected early masterpieces of science fiction.

Brian Stableford once again provides not only the translation but also an informative introduction and afterword.

Highly recommended!
Posted by dfordoom at 5:58 AM