Plunder of the Sun by David Dodge 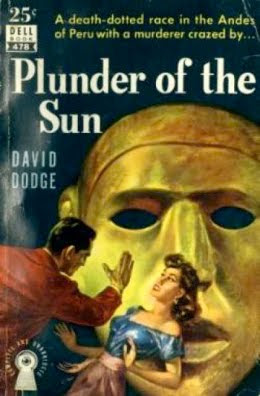 David Dodge’s best-known book is To Catch a Thief, on which Hitchcock’s movie was based. Plunder of the Sun is a similar kind of story - a combination of crime, adventure and romance.

Al Colby is offered what sounds like an easy job. All he has to do is take a package from Chile to Peru. His employer is a dealer in art and antiquities so the package probably contains some kind of ancient artifact. Smuggling such an item is illegal, but not overly dangerous. Or so he imagines.

The art dealer insists on accompanying him, but Colby will have to carry the merchandise. Since the dealer has a bad heart they must go by steamer. Colby soon makes the unpleasant discovery that someone on board wants that package. Wants it enough to kill.

That apparently innocent package draws Colby into a chase for Inca gold. Lots of Inca gold. Treasure on a scale to stagger the imagination. And there are at least three parties after that gold.

Colby is the first-person narrator but we find out very little about his background. Since he’s happy to be involved in smuggling we assume his past is a little shady but he’s no thug. Nor is he a loser. He has flexible morals, but he does have morals. And he’s no fool. We assume he’s probably been a private detective but he’s not fanatical about staying on the right side of the law. He’s tough and resourceful however, and he has moments when he feels a sudden overwhelming urge to do something honourable.

This is not quite a hardboiled novel although it has affinities with that genre. There are certainly plenty of double-crosses and there’s a pleasing mix of action, romance and adventure. There’s also a femme fatale, or rather two femmes fatale.

This is a thoroughly enjoyable tale, and was brought back into print by Hard Case Crime in 2005. It’s not quite the sort of book you expect from that imprint but it’s still worth checking out.
Posted by dfordoom at 9:20 AM