The Mystery Of The Green Ray 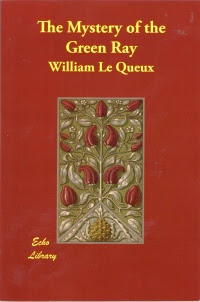 The Mystery Of The Green Ray is a 1915 espionage thriller that could also be considered as borderline science fiction.

William Le Queux (1864-1927) was an amazingly prolific author (with something like 150 novels to his credit) who specialised in thrillers and espionage novels. These often involved hypothetical accounts of German invasions of Britain or other deadly threats to the Empire.

He seems to have been a little on the eccentric side, but eccentric in an interesting way. He had a great enthusiasm for new technologies such as aircraft and radio, the latter playing an important role in The Mystery Of The Green Ray. Le Queux apparently had some slight problems distinguishing fact from fiction and ended up believing that the German intelligence services were out to get him. He convinced himself that he really had unearthed dastardly plots that threatened Germany’s war aims.

As the novel opens four young Englishmen are enjoying a peaceful days’ relaxation punting on the river but they are all too keenly aware of the storm clouds that are gathering. It is late July 1914 and the assassination of a certain Austrian archduke has Europe poised on the brink of war. Being patriotic manly Englishmen all four friends intend to do their bit by enlisting. Before doing so young Ronald Ewart must pay a visit to Scotland to see his fiancée Myra and her father, a retired general.

Ewart hopes to get in a bit of salmon fishing as well but this brief getaway proves to be anything but relaxing. Myra is also keen on fishing but disaster strikes unexpectedly - she is mysteriously struck blind! She sees a green flash and then nothing. Her father has an odd experience as well, reporting that a large rock overhanging the river seemed to be moving towards him. And then Myra’s faithful dog goes blind and as was the case with Myra it happens just as suddenly.

Ewart calls in a leading eye specialist who turns out to be a bit of an amateur detective and has connections with the military and naval authorities. He starts to suspect the possibility of some diabolical plot involving radio waves. There certainly is a conspiracy, but it’s much more bizarre than that. I won’t spoil it by revealing the exact nature of the plot but given that it takes place in 1914 and was written in 1915 you won’t get any prizes for guessing that the Germans are mixed up in it somewhere.

It’s all delightfully outlandish and a great deal of fun. The emphasis on gadgetry and diabolical inventions gives it a pleasingly pulpy feel. Le Queux was one of the major pioneers of spy fiction and fans of that genre should find plenty to enjoy.
Posted by dfordoom at 1:21 AM