Doc Savage: The Man of Bronze 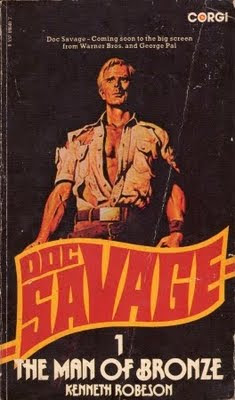 Doc Savage: The Man of Bronze was the first of 181 novels published between 1933 and 1949 featuring the scientist/adventurer/crimefighter Doc Savage.

Most were written by Lester Dent although only one was published under his own name.

This is the first Doc Savage novel I’ve read so my impressions of the character are necessarily based entirely on this one book.

Doc Savage is almost a typical superhero, but not quite. His strength, energy and intelligence seem superhuman but the novel stresses that these extraordinary gifts are the result of intensive training both physical and intellectual. He is unusual among superheroes in that he relies on brains and brawn in equal quantities. He can smash in a steel door with his bare fists, but he can also quickly whip up a formula for an immobilising gas or find an antidote to a poison.

The book quite neatly sets up situations where Doc is just as likely to need to call on his knowledge of medicine as on his ability to perform feats of strength and agility.

It’s a rather optimistic vision which I find to be quite refreshing. This is a world in which science and technology are still seen (quite correctly) in entirely positive terms.

Doc Savage is actually Clark Savage Jr. His father had been a wealthy man who spent most of his fortune on adventures that combined intellectual curiosity, a taste for adventure and a desire to make the world a slightly better place in which to live. He died suddenly from an unexplained illness. He left behind him a secret message and a worldly legacy. This inheritance comprises a vast tract of jungle in the Central American nation of Hidalgo.

Doc already has his doubts about his father’s death, and these doubts are strengthened by an attempt on his own life by a mysterious assassin who speaks the ancient language of the Mayans. When Doc and his friends set off to claim Doc’s inheritance they encounter continual attempts to prevent their arrival in the remote Valley of the Vanished. They also discover a lost civilisation and a fabulous treasure.

Doc and his friends must battle a fiendish conspiracy to steal the treasure and at the same time save the ancient kingdom of the Mayans which still survives in a remote valley. Doc faces an even more frightening prospect - the daughter of the king falls in love with him but Doc has vowed to have nothing to do with women and seems more than a little afraid of them.

The style is ultra-pulpy, which is no bad thing. It’s also energetic and highly entertaining.