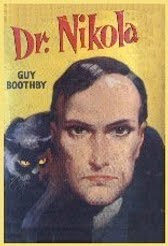 Dr Nikola (also known as Dr Nikola Returns) was a kind of sequel to Guy Boothby’s very successful 1895 novel A Bid for Fortune, which had introduced the world to the diabolical criminal mastermind Dr Nikola.

Boothby would go on to write three further Dr Nikola novels, forming just a small part of the prodigious output of novels produced by this Australian writer during his brief but highly successful literary career (he died in 1905 at the age of 37).

In the first novel Dr Nikola is trying to gain possession of a Chinese carved stick possessing vague but apparently almost limitless occult powers. His ruthless attempts to gain possession of this treasure involve a campaign of terror against a prominent Sydney citizen, a kidnapping and a bold bid to pass off a bogus English aristocrat.

The sequel sees Dr Nikola in pursuit of further powers associated with this Chinese talisman. This time Dr Nikola intends to penetrate the most powerful and ancient of all
Chinese secret societies. Success will involve passing himself off as a Chinese high priest and gaining access to a remote Tibetan monastery. Failure will mean instant death.

Dr Nikola requires an assistant for this adventure, and recruits an impecunious Englishman in Shanghai. Wilfred Bruce may be penniless and jobless but he does speak fluent Chinese and he does have a taste for adventure.

Where this book differs, in a most interesting manner, from its predecessor is that although the story is narrated by Bruce we get to see things much more from Dr Nikola’s perspective, and he appears in a rather different light. Ruthless and unscrupulous certainly, with boundless ambitions, but also courageous and almost admirable. And perhaps not entirely evil after all. A megalomaniac, but possibly with the intention of being a benevolent megalomaniac.

As in the first book we’re left in considerable doubt about the occult powers of both Dr Nikola himself and of the mysterious Chinese secret society. Does Nikola truly possess powers beyond those possessed by ordinary men? Are these powers supernatural, or merely paranormal? Or is he simply a skilled conjuror and hypnotist with a profound knowledge of psychology and quite probably considerable learning in the field of medicine, particularly in relation to the effects of drugs. Boothby leaves the question open, and while that can be a risky strategy the end result in this case is to heighten the fascination of the character.

Dr Nikola was one of the earliest diabolical criminal masterminds in genre fiction and remains one of the most interesting examples of the breed.

The first two novels in the series are published in a single volume in the Wordsworth Editions volume Dr Nikola Master Criminal. They’re a very entertaining blend of adventure and crime with a dash of the gothic and a large helping of the exotic. Highly recommended.
Posted by dfordoom at 1:14 AM