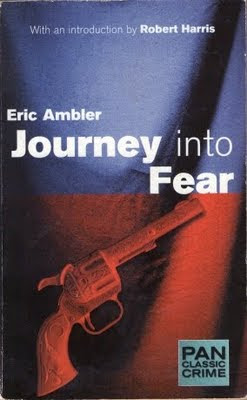 Ambler’s spy thrillers are very much like Graham Greene’s. They’re dark and cynical, they’re seedy and grungy. This is a world painted entirely in shades of grey. You can trust nobody. The most innocent action can plunge you into a nightmare world of paranoia and violence. People want to kill you even though you’re not the sort of person that things like that happen to. And often you’re not entirely sure why they want to kill you.

Take Mr Graham, the protagonist of Journey into Fear. I was almost going to say hero, but Amber’s world is like Greene’s. There are no heroes. There are plenty of victims, an abundance of innocent and not-so-innocent bystanders, lots of grey little men doing nasty little jobs, quite a few women prepared to do whatever they need to do in order to survive, but if you’re looking for conventional heroes you’re looking for the wrong author.

Mr Graham is an engineer. He’s 40 years old, he has a very good job, he lives in a comfortable house and he has a wife with whom he’s quite contentedly in love. His latest job has taken him to Istanbul. Mr Graham works for an armaments manufacturer, but to him the latest naval guns (such as the ones he’s selling to Turkey) are merely an interesting engineering challenge. It has never occurred to Mr Graham to think of the products of his company as instruments of death. In the comfortable and respectable suburb in which he lives people don’t talk about such unpleasant subjects.

So it comes as a huge surprise to Mr Graham when someone tries to shoot him in his hotel in Istanbul. In fact it’s such a surprise that he refuses to acknowledge it. He assumes it must have been a hotel thief. Mr Graham’s secure assumptions about the way the world works, or at least the way his world works, are rudely shattered in an interview with Colonel Haki of the Turkish Secret Police. Colonel Haki assures him that if he catches the train to Paris as he intends his chances of reaching England alive are somewhat less than zero.

Mr Graham finds himself on a disreputable steamer bound for Brindisi in Italy. It’s not a desirable means of travel but Colonel Haki has advised him that it’s the safest method. Mr Graham believes his troubles are over, until he spots among the passengers the very assassin who tried to kill him in Istanbul.

Ambler resembles Greene also in the fact that there is more more going on here than just a spy thriller. The emphasis is on psychology and atmosphere rather than action, and there’s also the sense of a civilisation collapsing into anarchy and chaos.

Ambler’s reputation rests mainly on his three classic late 1930s novels, Epitaph for a Spy, Journey into Fear and The Mask of Demetrios. They’re among the greatest of all spy thrillers.