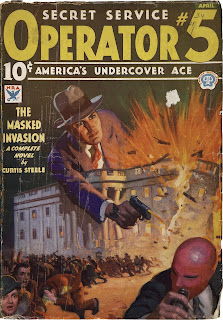 Operator #5 (later renamed Secret Service Operator #5) was a pulp magazine of which 48 issues were published from 1934 to 1939. Initially each issue contained a standalone novel although later in the run The Purple Invasion was a connected cycle of thirteen novels. Frederick C. Davis wrote the first twenty issues. Later issues were written by Emile C. Tepperman and Wayne Rogers but all the novels were credited to Curtis Steele. The first novel was The Masked Invasion.

The hero of the series was a young man named Jimmy Christopher, who poses as a fashionable photographer named Carleton Victor but who is in fact Operator #5 of the United States Intelligence Service. He gets some invaluable assistance from a young Irish lad named Tim Donovan (Having the hero assisted by a brave teenaged boy was obviously a good way to appeal to the likely readership of pulps). Jimmy also gets occasional help from his identical twin sister Nan (yes I know that if they’re brother and sister they can’t be identical twins but hey it’s only a story). Jimmy’s dad, an ex-Secret Service man, also pitches in at times.

The Masked Invasion begins with a blackout in New York City but it’s more than a blackout. Everything stops working, including cars and even devices powered by batteries. There have been a series of these blackouts, each longer and covering a larger area than the previous one. There’s some dastardly plan behind all this, probably connected with the sinister Loo Kong (the Yellow Peril theme would be explored more fully in later issues) although Loo Kong is not the mastermind behind it.

As soon as Nan is introduced into the story you just know that she’s going to get herself captured and held as a hostage in order to put pressure on Jimmy. This is pulp fiction and this story follows the pulp conventions to the letter.

Jimmy Christopher is your standard square-jawed action hero, heroic and noble and patriotic. The villains are totally evil and villainous.

As far as the chief villain is concerned there are two choices in this type of tale. His identity can be kept secret until the end, which has advantages from a dramatic point of view. Or his identity can be revealed immediately in which case there’s more opportunity to develop the full flavour of his particular evilness and the motivations which drove him to evil. The second option is probably the wiser choice. In this story, when the villain is unmasked, we can’t help feeling that we have no idea why he chose villainy as a career.

The mastermind has assistants that represent every source of paranoia that could be conceived in 1934 - there’s the wily Asiatic Loo Kong, there are communists, anarchists and even Czarists!

The plot is fast-moving and filled to the brim with action. The central idea is a good one and of course out means the stakes are high. The survival of the nation is in peril. It’s not just the Negative Ray and the Darkness. The conspirators have also employed pirates to seize dozens of ships which are now on their way to the United States filled with a vast army of armed cut-throats, and they’re foreigners to boot.

The style is pure pulp. There are no shades of grey. The armed blimp attack is fun and the body count is off the scale. The violence is plentiful but never graphic. There is of course zero sex. It’s all good clean fun. And it works. There were better science fiction/action pulps (such as Dusty Ayres And His Battle Birds or Dr Yen Sin or Doc Savage) but The Masked Invasion gets the job done with efficiency and energy. Recommended.