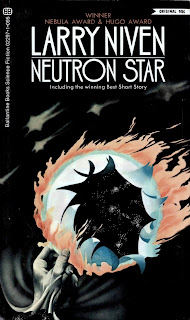 Neutron Star introduces us to the Puppeteers, the alien race that plays such an important part in the Known Space stories. A small spaceship recently came to grief in the vicinity of a neutron star. Something managed to get through the General Products hull to kill the crew. Which is of course impossible. Nothing can penetrate a General Products hull. The Puppeteers (who own General Products) hire Beowulf Shaeffer to make the same trip to the neutron star to find out what happened. In the unlikely event he survives he will be paid a great deal of money.

It’s a story that serves as a good introduction to the Known Space tales. There’s a strong hard science fiction element, there are touches of humour and there’s danger and adventure.

A Relic of the Empire concerns Dr Richard Schultz-Mann who is on a rather inhospitable planet looking for plant from the era of the Slaver Empire which ended billions of years ago. He’s found some and rather odd plants they are. At the moment he has other concerns - space pirates have just arrived on the planet. This is a bad thing, but Dr Mann thinks he may be able to turn it into a good thing. There is one thing that really frightens Dr Mann, but it’s not space pirates. There are some interesting twists in this story.

In At the Core the puppeteers hire Beowulf Shaeffer to plot an experimental spacecraft on an unprecedented voyage to the centre of the galaxy. It’s a publicity stunt. It’s also a voyage almost unimaginably longer than any previous voyage of space exploration by any species. At the core he finds something he would have preferred not to find. It certainly has a dramatic effect on the puppeteeers. It’s an OK story.

In The Soft Weapon a spacefaring couple make an exciting discovery - a stasis box from the time of the Slaver Empire, a billion and a half years ago. Unfortunately a Kzin warcraft is on the scene. The Kzin are hoping the stasis box will contain some kind of super-weapon. What it does contain is pretty startling. A good story.

Flatlander is another extraordinary voyage for Beowulf Shaeffer, in company with a rich man named Elephant. Elephant wants to visit the most peculiar planet in Known Space it seems like a good idea to ask the Outsiders (one of the more bizarre alien races in the Known Space stories). The Outsiders sell information and although their prices are high they have a reputation for scrupulous honesty. The Outsiders provide the necessary information although Beowulf Shaeffer can’t help feeling that it would have been worth paying the extra money the Outsiders asked for one more piece of information - the exact nature of the peculiarity of this particular planet. They set off for the planet anyway and Elephant learns something that Beowulf Shaeffer has alway known. A fairly clever story.

The Ethics of Madness is about a paranoiac. He’s not an actual paranoiac, but a potential one. As long as he gets his meds he’ll be OK but while regular checks by automated doctors might seem a foolproof way of ensuring that his brain chemistry remains stable no invention is ever entirely foolproof. When he does go mad it sets off a vendetta on a truly galactic scale. The twist is not unexpected but it’s still effective and it’s a fine story. And it’s an example of Niven’s interesting perspective on ethics.

The Handicapped is the story of some very peculiar aliens. The Grog are blind and deaf and entirely sedentary and they have no means of communication whatsoever but they have very large brains. Large enough to suggest that they are intelligent, and possibly very intelligent. But it’s impossible to imagine a creature with less use for intelligence. It just doesn’t make sense. Garvey is in the business of providing artificial aids for sentient beings with no hands but the Grog are a real challenge - there seems to be no way of finding out whether they really are sentient or not. Garvey has a strange feeling about these creatures but the truth is even stranger than he could have imagined. Another story involving ethical dilemmas, and a very good one.

Grendel gives Beowulf Shaeffer a chance to play the hero and he’s very unhappy about it. He’s on a spacecraft which is attacked by pirates. An alien is kidnapped. This could have serious repercussions for relations between humans and the aliens in question. In company with another human, a rather adventurous one from Jinx, Shaeffer reluctantly sets out to effect a rescue. He has a theory about how the kidnapping was done. There’s perhaps more emphasis on action rather than hard SF elements in this story but it’s entertaining.

On the whole Neutron Star is old-fashioned high-concept hard SF but with plenty of characteristic Larry Niven touches. Enjoyable stuff. Highly recommended.
Posted by dfordoom at 8:54 AM