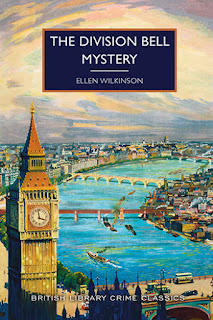 The Division Bell Mystery, published in 1932, was the only detective novel written by British Labour MP Ellen Wilkinson. It’s a locked-room mystery of sorts and it’s hardly surprising that she chose to set her story in the House of Commons.

The British Government has been negotiating a loan with an American financier, a Mr Oissel. Oissel is having dinner with the Home Secretary in one of the parliamentary dining rooms. The Home Secretary has to leave his guest for a few minutes to vote in a division and while he’s out of the room a shot is heard. The Home Secretary’s Parliamentary Private Secretary, Robert West, bursts in to find the financier dead. It seems to be suicide - there was no-one else in the room and no-one could have left without being seen. But of course it was not suicide. It was murder.

West finds himself having to play amateur detective. It’s not that Inspector Blackitt of Scotland Yard isn’t competent but the case has political implications and there are things that the Government might prefer the police not to know. In fact the case could provoke a full-scale political crisis, especially given that the Home Secretary’s involvement in the loan may have been at best unwise and indiscreet.

West being a very young MP (just twenty-nine). He would probably be wise not to confide in anybody but he’s in over his head and he’s not at all sure what he should do and he ends up confiding in just about everybody. Including journalists, City financiers, old school chums, left-wing lady Labour MPs and the granddaughter of the dead financier.

Of course it’s important to find the murderer but for West, the Home Secretary and just about everyone else the main focus is on saving the government. In fact nobody really cares about the murder very much at all.

Given Wilkinson’s politics you might be concerned that they would intrude on the story. And you’d be right to be concerned. She treats us to endless lectures on feminism.

It’s interesting that Wilkinson, a firebrand left-wing Labour MP, chose to make her hero a Tory junior MP. And not just a Tory, but a thoroughly decent fellow as well. But in fact he turns out not to be the hero of the story at all - that rôle is filled by a rather embarrassing Mary Sue in the person of a female Labour MP.

The author seems much more interested in the political intrigues than in the murder mystery. As a detective story it’s an abject failure. There’s no actual detecting. The solution is pulled out of a hat. The vital clues are not revealed until the end. The solution is too obvious. Wilkinson fails to provide the other suspects with any viable motives and she fails to provide any convincing red herrings.

As a political thriller it had some potential but that potential is never developed. It gradually loses whatever slight interest it might have had.

The only bright spot is that we get some fascinating details about parliamentary procedure and the architectural oddities of the Houses of Parliament.

Once again the real mystery here is why the British Library chose to include this book in its Classic Crime reprints series. They’ve reprinted a few real gems but they’ve also reissued far too many mediocre titles. The Division Bell Mystery is a mess. Definitely not recommended.
Posted by dfordoom at 8:17 AM