The Mystery of Hunting’s End 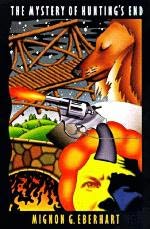 Mignon Eberhart (1899-1996) had an extraordinarily long career as a crime writer. Her first mystery was published in 1929; she wrote her 59th and last novel in 1988 at the age of eighty-eight. She was at one time apparently regarded as America’s answer to Agatha Christie. The Mystery of Hunting’s End is one of her early books, dating to 1930.

The plot is your standard “let’s take a group of somewhere between half-a-dozen and a dozen people and strand them somewhere and then have a murder occur” story. This is a very easy and convenient way to limit the number of suspects. If all the suspects are stranded somewhere then the guilty part must be one of their number, and the murderer cannot escape. In the hands of even a moderately skillful writer this device also helps to build tension.

In this case the site chosen is a hunting lodge. Sure enough, as soon as the prospective suspects are assembled the snow sets in, effectively cutting them off entirely from the outside world. Of course the author has to make sure that her detective manages to be included in the group. Eberhart does this by having the owner of the lodge (known as Hunting’s End) invite a detective along to try to solve a five-year-old murder. Matil Kingery’s father was shot to death at Hunting’s End five years earlier. The house has been shut up ever since. Matil has now invited everyone who was present at the time to join her at the lodge and she also invites private detective Lance O’Leary. O’Leary brings along  his friend Sarah Keate. She is a nurse and is ostensibly employed to care for Matil’s elderly and querulous Aunt Lucy, but in fact Miss Keate is something of an amateur detective as well.

Within a few hours of the arrival of the various members of the party another murder occurs. Being isolated in a house with a murderer is bad enough but for these unfortunates the situation is even grimmer - they have to share the house with the corpse as well, until the snow stops. As the days tick by tempers start to fray, and to cap things off food starts to run short.

There’s nothing especially wrong with the basic plot. The problem is with the execution. As a writer Eberhart has a number of very irritating habits. The worst of these is foreshadowing. This is a device that I don’t particularly like at the best of times. To me it seems like a cheap way of trying to heighten suspense. The problem here is that Eberhart is totally addicted to this device. Every few pages Sarah Keate (the narrator of the novel) is telling us once again that if only she’d known then what she knows now all this unpleasantness could have been avoided.

The writing is also rather long-winded and repetitive. The plot advances at a glacial pace. Too many conversations that don’t advance the plot are recounted in too much detail. The narrator spends too much time telling us how she feels.

By the time the plot was finally resolved I found that I had to a large extent lost interest. I had spent too long with too many uninteresting characters. Even the characters who might conceivably have been colourful (the party includes both a baroness and an opera singer) come across as being rather dreary and petty. We don’t know enough about them to take much interest in them and this being a detective story we don’t really need to know them very well. What we need is for the author to get on with the plot.

Reading a book such as this makes one appreciate the virtues of writers like Christie. Agatha Christie’s writing style isn’t going to dazzle anybody but she gets on with the job and doesn’t bore us. I’m afraid that Eberhart did bore me. I cannot in all conscience recommend The Mystery of Hunting’s End.
Posted by dfordoom at 9:34 AM