The Chronicles of Addington Peace 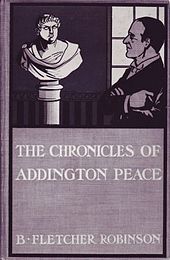 B. Fletcher Robinson’s The Chronicles of Addington Peace is a fairly obscure but quite entertaining 1905 collection of detective stories.

Mr Phillips is an artist. To be more accurate, he is a wealthy young man who fancies himself an artist. His path crosses that of Inspector Addington Peace of Scotland Yard. Mr Phillips finds himself thrust into the role of detective, not altogether reluctantly. He finds that aiding his friend Inspector Peace in his investigations is a good deal more fun than playing at being an artist.

Inspector Peace is a shrewd little man who enjoys baffling people with his crime-solving skills. He’s the sort of detective who likes to have an audience so it makes perfect sense that he’d be happy to have a sidekick to admire his brilliance. Not that Addington Peace is an egotist on the Sherlock Holmes scale. He’s a rather quiet and likeable fellow in general.

This collection is very much in the Sherlock Holmes mould, with ingenious and very complicated crimes, the sorts of crimes that require imagination as well as thoroughness in a detective.

As was usual in Edwardian detective fiction the eight cases collected here are not all murders. There is the obligatory jewel theft, and even where sudden death is involved we should not always jump to the conclusion that it is murder.

In 1905 the detective story had not yet evolved into the familiar pattern of the so-called golden age in which the author is expected to provide sufficient clues to allow the reader (in theory at any rate) to have a chance of solving the crime before the detective’s revelation at the end. In some of these stories that is the case, but in others the objective is to display the detective’s extraordinary skills rather than to allow the reader to do the same.

Mr Phillips is a classic detective story sidekick. He’s an intelligent and perceptive man but we know there’s no chance he’ll find the solution to a crime before Inspector Peace does.

Fans of vintage crime fiction love bizarre methods of murder. In these cases there are enough murders by means of ceremonial jade spears and disappearances involving secret passageways to keep such fans happy. It is unlikely that any real-life policeman would ever encounter such unlikely cases as these but that’s all part of the fun. If you want realism in your crime fiction that’s fine but readers in Victorian and Edwardian times wanted a touch of the fantastic and that’s what Robinson gives them.

The Chronicles of Addington Peace is a thoroughly enjoyable collection. Readers who can’t get enough of the crime fiction of this era will be delighted that Coachwhip Press have made this collection available as part of their 2 Detectives series (each volume containing two crime short story collections by two different authors of the Victorian and Edwardian eras). Warmly recommended.