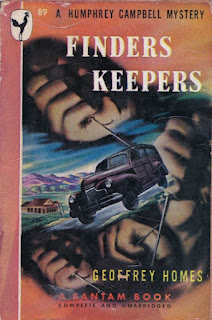 Daniel Mainwaring wrote a number of successful mysteries under the pseudonym Geoffrey Homes. His last and most famous novel, Build My Gallows High, represented a change in direction. It was the source for one of the greatest of all examples of film noir, Out of the Past (for which he also wrote the screenplay). Mainwaring eventually abandoned the writing of novels to concentrate on screenplays.

Humphrey Campbell is not your standard hardboiled private eye. He is fairly hardboiled but  he drinks nothing stronger but milk, he plays the accordion and is passionate about accordion music, and he’s fat. Although he insists it’s muscle, not fat. He works for a guy named Oscar Morgan and while their business is legal it’s not exactly respectable.

A guy named Burke turns up at the office claiming to be a member of the Dunecht family. The Dunecht family fortune was made in the late 19th century by old Senator Dunecht, a man of great ability and very flexible ethics. Now the head of the family is the senator’s son Stephen. Stephen is by now quite an old man. He is on the point of changing his will, a change that will considerably affect the futures of the various members of his family.

The old senator’s wife had run off with a foreman in 1893. Not too long afterwards she gave birth to a son. Was the boy the son of the senator? In which case Burke is the senator’s grandson and is entitled to half the Dunecht fortune. Or the boy the son of the foreman? In which case Burke is the foreman’s grandson and is entitled to nothing. The evidence is inconclusive but it sounds like Burke might have a case. He has enough evidence on his side to persuade Oscar to take the case and Humphrey (who does the actual investigating while Oscar handles the business side of things) sets off for the Dunecht mansion.

Humphrey very quickly discovers a murder. A very very old murder. A murder that appears to have taken place in 1894. But that will not be the last murder with which the Dunecht family is involved.

Stephen has a son and a daughter (who seem to have inherited the senator’s unscrupulousness), plus a stepson. There’s also a young woman who appears to have attracted the interest of more than one of the male members of the Dunecht clan.

Structurally this is very much a golden age detective story. The emphasis is on the plot and the emphasis of the plot is on the solving of a puzzle, or in this case several related puzzles. It’s a complicated but nicely constructed plot and it’s easy to believe that just about everybody involved is capable of murder.

Characterisation is sketchy but vivid, which is what you want in a golden age detective story.

Humphrey Campbell himself is a fine hero. His bulk tends to lead people to the conclusion that he’s no tough guy. That’s a mistake that such people often come to regret. His passion for milk and accordion music and his genial if somewhat unassuming personality can also lead people to suspect that he’s not exactly a sharp-witted detective. That’s another mistake that people often come to regret. Humphrey is a likeable sort of hero, perhaps just a bit of a rogue but one who is careful to stay on the right side of the law.

Finders Keepers is thoroughly entertaining and is highly recommended.
Posted by dfordoom at 8:05 AM