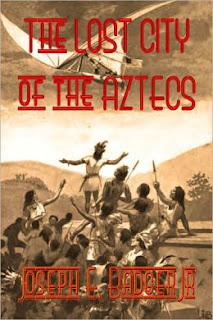 Joseph E. Badger Jr’s The Lost City (or The Lost City of the Aztecs as the title appears in some editions) is an 1898 lost world tale. Lost world stories were immensely popular in the late 19th and early 20th centuries and this is an entertaining if very pulpy example of the breed.

Professor Phaeton Featherwit is a keen aeronaut. In an airship of his design he and his two nephews, Bruno and Waldo Gillespie, find themselves caught in a tornado. Literally in the tornado - their craft is swept into the very vortex of the storm. Against the odds they survive and are finally are able to bring their flying machine safely to the ground. But where are they? They are certainly a long way from their starting point.

Professor Featherwit believes they have been carried into the unexplored regions of the Olympic Mountains in Washington State. They are in a remote valley entirely cut off from the outside world by impassable mountains. Surprisingly enough they come across a human being whom they rescue from a whirlpool. The surprise is that the man is a white man. He is in fact another aeronaut, Professor Cooper Edgecombe. He has been marooned in this valley since his balloon crashed there ten years earlier. He had been trying to locate his missing wife and daughter who had been carried away by a balloon, thanks to the machinations of an enemy of Professor Edgecombe’s.

When Edgecombe takes them to the cave that has been his home for the past decade they make another extraordinary discovery - Aztec weapons and clothing. Even more amazingly, these weapons and clothing appear to be new although they are indubitably authentic. Can it be that a lost tribe of Aztecs has survived in this remote valley for so many centuries?

It is soon evident that that is indeed the case. There is not only a lost tribe of Aztecs, but an entire Aztec city. A city populated by large numbers of living breathing Aztecs.

All this is strange enough but the adventures of Professor Featherwit and his nephews have just begun. They will encounter the Aztecs at much closer quarters and will be called upon to carry out a particularly daring and dangerous rescue, a rescue of two people whose existence in the Aztec city is perhaps the biggest surprise of them all.

Badger’s style is pulpy in the extreme, betraying his lengthy career as a writer of dime novels. Pulpy it may be but it’s undeniably vigorous and enthusiastic. Badger wastes little effort on characterisation. His characters are mere sketches although Professor Featherwit is a colourful enough personality. Bruno and Waldo are brave but impetuous, and their stout hearts will prove very useful.

Badger’s depiction of this lost Aztec society is quite even-handed. There are elements within the city who can fairly be described as blood-thirsty heathens and they certainly do practise human sacrifice, but our intrepid aeronautical adventurers will also come into contact with some very courageous and noble Aztecs as well. The Aztecs are divided into two warring camps, the issue at stake between them being the origins (and the ultimate fates) of the two Children of the Sun who have been living in the Aztec temple or some years.

There’s plenty of action and this rather short novel is strong on excitement. Bold deeds are performed, there are narrow escapes from disaster and there are both tragedies and triumphs.

Fans of lost world tales (among whom I very definitely count myself) will find a great deal of enjoyment in Badger’s stirring and heroic little yarn. Warmly recommended,

The good news is that the book is readily available from various print-on-demand publishers and it’s quite inexpensive as well.
Posted by dfordoom at 9:03 PM