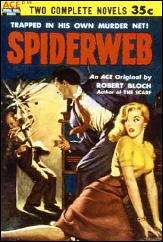 Robert Bloch is best-known as the author of Psycho. He stated his career as a disciple of H. P. Lovecraft but quickly established his own style. He wrote science fiction, horror and crime fiction but his trademark was always his interest in what makes people tick - especially people with a weakness of some kind.

His novel Spiderweb, published in 1954, is hardboiled crime fiction although perhaps really closer to being a psychological thriller.

Eddie Haines is a failure. He was a minor radio personality on a minor radio station in a small town in Iowa. On the strength of this he headed for the big city, to LA, with an idea for a TV show - the Television Psychologist. Now all his money is gone, gone to pay an agent who now informs him that he’s a nobody and should head back to Iowa. Drunk and despondent he sees only one way out, courtesy of a razor. It will be a fitting end to a career of failure. Just as he is about to cut his throat someone slips a hundred dollar bill under his door.

That someone is Professor Otto Hermann. Hermann is a crooked psychologist, involved in various psychological and psychic scams. He offers Eddie Haines new hope, of a sort. Sadly Eddie doesn’t realise just how high the price will be. Eddie doesn’t know it yet but the professor’s activities extend to murder and blackmail.

The professor needs someone who can front for him - someone who is young and good-looking and can appear respectable. The sort of man that people will trust. Someone who either has real class, or can at least fake it. He re-invents Eddie as renowned psychological counsellor Dr Judson Roberts. Dr Roberts is soon the author of a best-selling pop psychology book (ghosted for him of course). The professor trains him in all the skills a successful scam artist needs - some basic psychology, hypnosis, the kinds of occult and psychic stuff that appeals to rich but troubled people.

Professor Hermann has his eye on Hollywood. Lots of rich neurotic people there, lots of pigeons ripe for the plucking. Their first victim is a minor starlet, Lorna Lewis. This proves to be Eddie’s undoing, involving him in murder. Now the professor has an ironclad hold over him.

Eddie is soon doing quite well for himself. “Dr Roberts” has a full appointment book, a rich roster of wealthy victims. People like Edgar Caldwell. Caldwell has a very successful business, a luxury home, a wife and a mistress. He also has a full suite of anxieties and neuroses, a fetish for saving string and some colourful sexual kinks. Caldwell has plenty of money and Eddie has no qualms about taking some of it off his hands. When he learns the full extent of Otto Hermann’s plans for Caldwell Eddie suddenly develops a conscience. He’s happy to fleece his clients but destroying them is another matter. And Eddie has started to believe that his psychological counselling can actually help people (which shows just how out of touch with reality he is).

But Eddie has a murder rap hanging over his head. Escape seems impossible. To add to the complication of his life he has fallen in love with Ellen Post. Ellen is basically a nice girl but her idea of a good time is to have a few drinks. And then have a few more drinks. And then to have even more, just for good measure. Eddie now has to find a way to save Ellen from herself whilst saving himself from Otto Hermann.

This is not one of Bloch’s better known books but it’s fine entertainment. It has a nicely glamorous but sleazy atmosphere. It has a memorable villain. It has the world of carnival hucksters, phony pyschics and evil scheming psychiatrists as background. It has suspense and romance. It has a solid hardboiled style.

Most of all it has a tortured hero, a man who is a mixture of ambition, avarice, resentment, idealism and innocence. A true noir hero, desperately struggling to escape from the spiderweb that his own weaknesses have led him into.
Posted by dfordoom at 2:20 AM