Mickey Spillane's I, The Jury 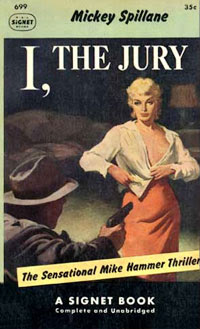 In 1947 Mickey Spillane’s first Mike Hammer novel I, The Jury hit the bookstores. Depending on your point of view this event marked the degeneration of crime fiction or it represented a breath of fresh air.

I belong to the second school of thought. Spillane wasn’t interested in making us feel sorry for criminals. He thought victims of crime deserved more sympathy than hoodlums. Mike Hammer isn’t very subtle but he does have a well-developed sense of justice. And if the courts and the police can’t deliver justice then he’ll do the job himself.

I, The Jury opens with the murder of an old buddy of Mike Hammer’s, a ex-cop turned insurance investigator. He’d been digging into something besides insurance claims and Hammer has to find our what it was.

Along the way he encounters a retired racketeer, a smooth ladies’ man, a hooker, two beautiful twins at least one of whom is a nymphomaniac but he’s never quite sure which one it is, and a glamorous female psychiatrist with whom he falls in love. Mike’s a tough guy but he’s a bit of a closet romantic. Any or all of these people could be involved in the murder, or hold the key to solving it.

Hammer approaches the case in his usual direct style. If in doubt, slug someone. It seems to work.

Spillane added more sex and violence than had been customary in earlier crime fiction, rather as Ian Fleming was doing to the spy genre at roughly the same time. Both authors have been criticised for doing so but I doubt that either was too worried by the criticism. Success tends to speak for itself.

Spillane’s books are trashy and pulpy but they have plenty of energy and they’re terrific entertainment.
Posted by dfordoom at 1:12 AM