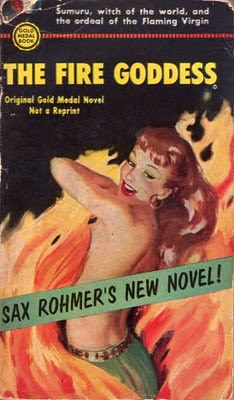 The Fire Goddess (published in Britain as Virgin in Flames) was the third of Sax Rohmer’s five Sumuru novels published between 1950 and 1956. Rohmer is best known for his Fu Manchu novels but his output was quite varied and included some excellent gothic horror tales.

Sumuru is in some ways a female version of Dr Fu Manchu. She’s also a diabolical criminal mastermind and an evil genius but her aims are rather different. Her objective is a world run by women, a world in which ugliness and violence will be abolished. Like all idealists she is prepared to use force to achieve her objectives.

Sumuru is more subtle than most however. She prefers to use brainwashing and sexual manipulation rather than overt violence. She has an army of women at her disposal, all of them beautiful.

She has married several times, always to extremely rich men. Each marriage has increased her wealth, and each husband has been ruthlessly discarded. Her enormous wealth has allowed her to build a vast criminal empire, the Order of our Lady. She has attracted the attention of various police forces as well as the FBI but no-one has ever succeeded in bringing any charges against her.

Her latest base of operations is in Jamaica, in a remote valley. Others have plans for this valley - the government hopes to construct a dam while a large mining company is anxious to explore the region’s rich bauxite deposits. Sumuru is determined to put a stop to any such interference in her domain.

Sumuru has problems within her organisation. One of her chief lieutenants, Sister Melisande, has ambitions of her own and there may be another traitor as well. And there is a Scotland Yard inspector making a nuisance of himself. Sumuru’s Jamaican operations involve voodoo and her followers on the island must undergo a trial by fire before being admitted to full membership of the Order of our Lady. Such a ceremony was unfortunately witnessed by an outsider who had to be eliminated and this was the event that attracted the notice of Scotland Yard. There’s also a young mining engineer, Lance Harkness, sent by his company to make a preliminary investigation of the bauxite deposits, and this may prove to be tiresome. One of Sumuru’s women is given the task of neutralising this threat. This does not necessarily entail murder - Sumuru prefers to recruit possibly useful people into her organisation rather than killing them and sex is usually an effective way to lure them in.

The style of the Sumuru books is very similar that of his Fu Manchu books - delightfully overheated and pulpy - and they’re just as much fun. The main difference is that Sumuru uses sex a lot more to further her plans for world domination.

A very enjoyable slice of vintage pulp fiction, highly recommended.
Posted by dfordoom at 3:04 AM