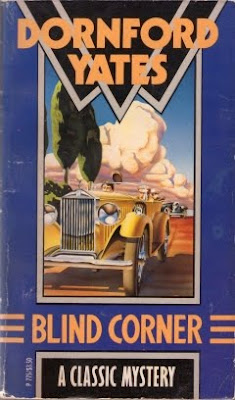 Dornford Yates (1885-1960) was one of the most popular British authors of thrillers in the years between the two world wars. In fact Yates, Sapper and John Buchan he could be said to be the big three of the thriller genre at that period. All three authors are unjustly neglected today, Yates even more so than Sapper and Buchan.

Blind Corner, published in 1927, was the first of his thrillers featuring Richard Chandos.

A young Englishman named Richard Chando, by an accident of fate (the kind that happens so frequently in thrillers) witnesses a murder while travelling in France. The murderer and his victim had been discussing a treasure that one of them apparently had information about. Chandos promises the dying man that he will look after his dog and when he examines the dog’s collar he finds that he now possesses the key to finding the treasure.

He fails to report the matter to the police, presumably because he scents adventure in the offing. On his return to England he has another chance encounter, but this one turns out not to be accidental at all. He meets Jonathan Mansel and through him discovers that the dead man was a British intelligence officer.

This is not however going to be a spy thriller. The treasure had belonged to a nobleman in Austria who was literally a robber baron. He had hidden his loot in a well on his estate and now several centuries later Mansel intends to find it.

They are not the only ones hunting the treasure. The murderer has joined forces with a notorious criminal named Rose Noble, a particularly dangerous but extremely cunning man. The two gangs become involved in what is in effect a private war. Mansel and his friends are holed up in the dead nobleman’s castle while Rose Noble and his gang lay siege to it. In some ways there’s not much difference between the two gangs. Neither has any legal right to the treasure. But there is a crucial difference - Mansel and his friends are gentlemen who are loyal to each other while Rose Noble and his crew are lower-class thugs who would cheerfully slit each other’s throats.

Both gangs are now caught up in a race as they pursue the treasure from different directions, from within and from outside the castle.

Blind Corner is slightly different in tone from most British thrillers of that age since the heroes are in fact engaging in activities that are in fact quite illegal, even if they are decent chaps and thoroughly brave and noble. In that respect they’re closer to gentlemen thieves like Raffles than to conventional heroes such as Bulldog Drummond.

This is a thoroughly enjoyable adventure yarn and well worth tracking down.
Posted by dfordoom at 1:19 AM