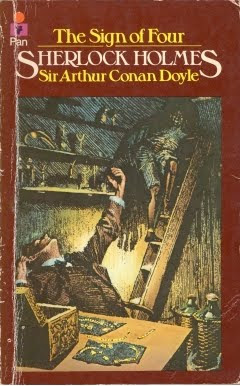 Apart from The Hound of the Baskervilles Conan Doyle’s Sherlock Holmes novels are not as highly regarded as his short stories. In the case of The Sign of Four that’s something of a pity as it really is splendid entertainment.

A young woman has been receiving puzzling annual gifts for several years - extremely valuable pearls. Her father had been an army officer who had served in India and later in the garrison of the penal colony in the Andaman Islands. His disappearance had been a source of great sorrow to her.

She then receives a letter informing her that the pearls are an attempt to recompense her for a wrong that has been done to her. She suspects the pearls may have some connection with the mystery of her father.

She is of course correct. What follows is a story of both honour and dishonour among thieves, of fabulous treasure, of family shame and murder.

Sherlock Holmes made his first appearance in print in the novel A Study in Scarlet in 1887. This was followed by The Sign of Four in 1890 and by the first of the short stories in 1891.

While there’s no real necessity to read any of the subsequent tales in any particular order I think it is highly desirable to read The Sign of Four first. When he wrote A Study in Scarlet Conan Doyle had no way of knowing just how durable the detective was going to be and it’s not until The Sign of Four that the character appears in a fully developed form. It establishes the various quirks of his personality and the peculiarities of his method in considerable detail. While Conan Doyle certainly could construct ingenious plots the main interest of the Sherlock Holmes stories is in those oddities of personality and in his approach to the problems of crime-solving. Once you’ve read The Sign of Four you have the necessary background to appreciate the later stories.

The great detective’s addiction to cocaine, his struggles with depression and boredom, his disdain for the plodding methods of Scotland Yard, his minute powers of observation and his ability to extract extraordinary amounts of information from the most trivial clues, his quixotic approach to problems of justice and the law - it’s all here.

The Sign of Four is a fine story in its own right and it’s the perfect introduction to the world of Sherlock Holmes.
Posted by dfordoom at 8:39 PM