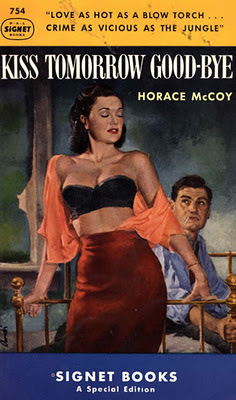 Horace McCoy (1897-1955) was one of the best writers of the hardboiled school of American fiction. While he was definitely hardboiled he wasn’t really a crime writer as such. Crime is usually peripheral to his books, as is the case with his best-known work, They Shoot Horses, Don't They?. The closest he came to writing a genuine crime novel was Kiss Tomorrow Goodbye which appeared in 1948.

The novel was one of the first crime novels to focus on the psychology of a vicious psychopathic murderer, predating Jim Thompson’s the Killer Inside Me by several years. McCoy’s book is in fact by far the better of the two.

The problem with crime stories dealing with psychopaths is that the protagonists are generally so detestable that it’s impossible to care what happens to them. Such stories are also usually so unpleasant that reading them is more of an ordeal than a pleasure. Kiss Tomorrow Goodbye avoids this problem to some extent by making its first person narrator protagonist more interesting than most.

The book starts with Ralph Cotter’s escape from a prison farm. The break was organised by the sister of one of the other prisoners. Her brother had almost finished his sentence but was about to be extradited to face murder charges. The brother is killed in the escape. He is in fact accidentally shot by Cotter during a shootout with the prison guards.

Cotter teams up with the sister and with another small-time criminal, Jinx. The sister is named Holiday and she and Cotter are soon lovers, embroiled in a relationship based on violence and lust but that suits both parties just fine.

Now that he’s out Ralph needs to get his hands on some money so he robs a produce market. He kills a man during the course of the robbery and this gives us our first insight into Ralph’s horrifyingly casual attitude towards violence. He is a man entirely lacking in conscience, and a man who is self-centred to a degree that almost defies belief.

Soon after the robbery a couple of cops arrive at the apartment shared by Ralph and Holiday. They’re not interested in making an arrest however. What they’re interested in is a payoff. If Ralph hands over the proceeds of the heist he is free to catch the next bus out of town and across the state line. Ralph now comes up with a stroke of genius. He lures the cops back to the apartment and offers them more money if they’ll let him stay in town, and he also offers to cut them in on the proceeds of further robberies. This interesting conversation is recorded by Jinx. With the recording of this conversation, and with the help of a shady lawyer called Mandon, Cotter now blackmails the police officers into a permanent criminal partnership. It’s a partnership that will be characterised by an extraordinary degree of cold-blooded violence.

So far it might sound like a straightforward crime story involving crooked cops but this is not what interests McCoy. He is more concerned with the tangled inner workings of Cotter’s mind and with the fateful results of his meeting with the young, strange and extremely rich Margaret Dobson. Cotter’s brief sexual liaison with Margaret triggers off a series of disturbing childhood memories, memories that hold the key to Cotter’s character and his fascination with violence and death.

The Freudian nature of these memories does tend to date the book rather badly and if (like me) you have little patience with Freudian silliness you may find all this to be more than a little annoying.

Other aspects of Cotter’s personality are more interesting. He was not forced into crime by poverty. He was born into wealth and privilege. He attended an Ivy League college and was a brilliant student. He is a connoisseur of the finer things in life. He is a gourmet, an art lover and a wine buff. He is an unashamed elitist, an intellectual snob who regards his criminal accomplices with contempt. He believes he is destined for greatness.

The book is a psychological study of a gifted and unusual but entirely depraved misfit and while the Freudian angle might stretch credibility somewhat it remains one of the more intriguing and original hardboiled novels. Recommended.
Posted by dfordoom at 2:38 AM